Wide but relatively short drainage, a tributary of McElmo Creek, containing ancient ruins and photogenic rock formations. Three are along a trail, east of the main canyon, while some others are off-trail, further upstream, and may be glimpsed from the rim. The upper end of the canyon narrows to a shallow slot

Trailhead: North side of Road G

The two most popular hikes in Canyons of the Ancients National Monument, both well-known even before creation of the monument (in 2000), are along Sand Canyon and the East Fork of Rock Creek, a pair of relatively short drainages on the north side of McElmo Creek, which runs along the southern edge of the preserve and is followed by county road G. Both are two-level canyons, with a sometimes narrow inner section, above which are broad benches, partly of Entrada sandstone, framed by tall cliffs of the much wider upper level canyon.

The Anasazi, or Ancestral Puebloans built many dwellings in these canyons, the majority at the base of the upper cliffs, but some along the inner ravines - in alcoves, on top of rock outcrops and on benches, and a selection of these in the East Fork of Rock Creek may be viewed along a well maintained trail which loops all around the drainage, running along the bench above the inner ravine, for a total distance of 7 miles. This comes close to ruins only at the start, the last being after 1.3 miles, but there are more structures beyond, below the bench; some may be seen, at a distance, from the canyon rim. Past the final ruin, the inner canyon gradually narrows, ending with a little slot section as the drainage rises to the bench. Overall, this is an enjoyable hike which passes varied scenery, some well-preserved ruins and a number of photogenic rock formations.

The trailhead for Rock Creek and Sand Canyon is along Road G, 12.4 miles west of the US 491 junction near Cortez, on the north side - at a part sand, part slickrock pullout, possibly soon to be replaced with a paved lot a short distance west. Popular days may see several dozen vehicles parked here. Road G is rather winding, and bumpy in places, but quite well used, passing through developed surroundings of houses and small farm fields for about 20 miles, becoming much emptier and more remote for the next 10 miles, up to the Utah stateline. There do not seem to be any places suitable for free primitive camping nearby.

One trail heads west from the parking area, initially staying near the road boundary fence, and this forms part of a loop into the lower reaches of Rock Creek, used mostly by mountain bikers. The main trail though is due north, up a slickrock slope, past a prominent Canyons of the Ancients sign and onto a bushy area beneath Castle Rock, an isolated sandstone outcrop which has a minor ruin on the far side. Beyond, the path, marked by large cairns, reaches a second junction, also on the left, with the Slickrock Route, an alternative way to lower Rock Creek, also mainly for bikes. The third, main, junction a few hundred feet beyond over more open rocks is the divide of the trails to Sand Canyon (right) and Rock Creek (left). This latter path soon enters a little drainage, a tributary of the East Fork, and reaches the first ancient ruin, near the head of the drainage just north of the streambed - a neat-looking wall in a good-sized alcove above a low, unclimbable cliff, with a wide doorway in the middle. The path then rounds a corner beneath a few hoodoos, to the second ruin; a tiny wall fragment in a smaller, more sheltered alcove. After a protruding fin, ending at a pinnacle, the path continues a little way to a third ruin, just before another fin. This has an intact section of wall beside fallen blocks, near a soot-blackened roof, also in an alcove. The trail then rounds the end of adjacent ridge to reveal the main East Fork canyon, here half a mile wide, extending north for about 2 miles. There are no more ruins beside the path, though some of those down in the canyon can be seen from a distance, and hence most people turn back here.

The path veers northeastwards, descending gradually, crosses a lesser path and meets an old vehicle track which provides an onwards continuation. This track was constructed in the early 1900s to service a mine, traces which can still be seen, one mile ahead. The track eventually narrows to a path which loops all round the drainage, moving back south on the far side and meeting the other two trails that fork west near the trailhead.

Ruin in an alcove

Panorama near the trailhead 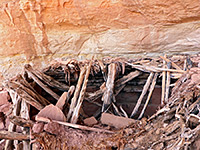 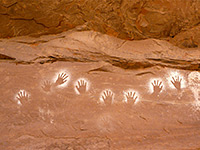