Highlights:
An especially deep, dark and sheer-walled gorge, formed by the Gunnison River as it cuts through hard igneous rock on the west side of the Rocky Mountains. Overlooks and short trails along the rim; steep and difficult routes down to the river
Nearest cities with hotels:
Delta (35 miles), Montrose, 13 miles
Management:
NPS
Location:
38.541, -107.693
Seasons:
The South Rim is open all year, but the road along the canyon edge is closed by snow from November to April, as is the North Rim entrance road
Rating (1-5):
★★★★★
Weather:

Black Canyon of the Gunnison - Viewpoints

Viewpoints
17 canyon overlooks, on the south rim and the less visited north rim; beside the road or along short trails
Featured Hotel 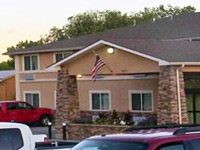 Affordable hotel just off Main Street on the east side of Montrose. There are several restaurants within a couple of blocks, one right next door. Black Canyon is 12 miles away

All hotels in Montrose - Affiliate disclosure
Most rivers of the Southwest cut through relatively soft sedimentary rock, forming canyons that tend to be quite wide, colorful and stepped - descending in a series of cliffs and ledges through layers of differing hardness; when rivers flow across harder igneous rock they produce steeper gorges, spectacular in different ways, such as Hell's Canyon in Idaho, the deepest in the US, or the multicolored Grand Canyon of the Yellowstone in Wyoming. One of the steepest, darkest and most rugged of such canyons is formed by the Gunnison River as it flows through hard, ancient rocks at the western edge of the Rocky Mountains, on its way to joining the Colorado River at Grand Junction.

The canyon walls are composed of volcanic schist, predominantly black in color, and as the gorge reaches depths of over 2,000 feet while often being only 1,500 feet across, sunlight illuminates the walls only briefly, hence the name Black Canyon. It is unsettling, almost frightening to stand at the very edge of one of the canyon overlooks, such is the menace and sheerness of the jagged rocks below. In 1999, Black Canyon was upgraded in status from a national monument and became the 55th national park in the US, and the third smallest.

Map of Black Canyon of the Gunnison National Park.

Black Canyon was originally over 50 miles long, but three dams have been built along the eastern (upstream) section flooding two thirds of the gorge, which is now part of Curecanti National Recreation Area, offering many leisure opportunities based around the artificial lakes. Only the lower 13 miles of the canyon remain unspoilt but this includes the deepest and most scenic section, within the national park. The river here may be approached from the north or the south but most visitor services are along the south rim and are reached by the short spur road CO 347, which joins US 50, one of the main trans-Rockies routes, a few miles east of Montrose. At the junction, the terrain is quite flat and relatively low in elevation, but CO 347 climbs steadily by 1,500 feet, winding through scrub-covered foothills to an elevation of 8,500 feet near the canyon rim, yet still with no indication of the great gorge ahead. The main park campground is situated just past the entrance, offering plenty of sites although they are rather enclosed by vegetation, generally out of sight of the canyon.

Before the campsite, the paved East Portal Road forks off and descends to river level along a steep side canyon, with many sharp bends, to East Portal Dam which marks the boundary between the national park and Curecanti NRA. However, all the canyon overlooks and visitor facilities are found along the main entrance road, which continues alongside the canyon rim for 8 miles northwest then southwest, passing 12 named viewpoints, most of which require a short walk to see the canyon. There are also three nature trails across flattish land around the rim, and three difficult routes down to the river, 'easiest' being the Gunnison Route.

As with some other Southwest canyons, seeing many viewpoints of the same feature can become a little repetitive, although here the character of Black Canyon does change along the river. Around the visitor center and for a couple of miles northwest, the cliffs are very steep and the canyon is at its narrowest - only 1,150 feet across at The Narrows. In many places, thin veins of white gneiss criss-cross the predominantly black cliffs, which are eroded into amazingly jagged, precipitous crevasses and pinnacles. Further west, the surrounding hills are lower and the canyon opens out becoming less deep and more V-shaped. From High Point, at the end of the road, it is possible to see 8 miles further west, almost to the end of the gorge, but there is no easy access to the majority of the canyon beyond this point. The land either side of this section of the river is an officially designated wilderness area and there are many steep ridges and valleys that provide a barrier to travel.

Because of the more difficult access and lack of facilities, few people visit the North Rim of Black Canyon even though the views are just good as those from the south, and the place is much more peaceful.
Affiliate disclosure

The approach is along a quiet backroad through farmland, starting near Crawford on Hwy 92, then 6 miles on a good quality gravel track (closed by snow during winter) across sagebrush flats and rolling hills; empty lands which offer several places suitable for free primitive camping. The journey ends with a gentle descent along a shallow valley (Grizzly Gulch) to the rim, where the road forks; the west branch leads to a ranger station and a small, lightly-used campground while the east branch passes five canyon viewpoints. The half mile (loop) Chasm View Nature Trail starts at the campground, and reaches two fenced overlooks, close to the point where the Gunnison River bends from the southeast to the southwest. In the other direction, the five viewpoints are either at roadside or along very short trails, all seeing different parts of the canyon though encountering similar-looking scenery. One hour might be enough to visit all the overlooks, and for people not camping here there is not much else to do, unless hiking on one of two longer rim trails (North Vista and Deadhorse), or the three strenuous routes to the river (Long Draw, Slide Draw and SOB Draw).

Black Canyon of the Gunnison - Trails

Gunnison Route
★★★★★
1 mile, 1800 feet
Unmaintained route vertically down the precipitous cliffs of Black Canyon, all the way to the river

Long Draw
★★★★★
1 mile, 1800 feet
Descent to the Gunnison River via a cool, narrow, sheer-walled tributary ravine that provides some shade most of the day

Black Canyon of the Gunnison - Wildflowers 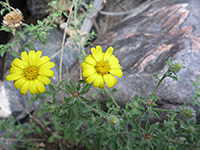 Black Canyon of the Gunnison - Photographs