Highlights:
The most famous and most visited section of California's Sierra Nevada mountains, containing huge glaciated peaks and valleys, centered on beautiful Yosemite Valley, location of several spectacular waterfalls. The high elevation Tuolumne Meadows area is much more peaceful, and has many trails, to lakes and summits. Other regions include Wawona and Mariposa Grove, and Glacier Point
Nearest city with hotels:
Oakhurst, 15 miles
Management:
NPS
Location:
37.740, -119.574 (Yosemite Valley), 37.875, -119.355 (Tuolumne Meadows)
Seasons:
Yosemite Valley and Wawona are open all year. Glacier Point Road is generally accessible from late May to November, and the Tioga Road/Tuolumne Meadows from early June to November
Rating (1-5):
★★★★★
Weather:

Yosemite Valley
Central attraction of the national park, the dramatic, glacier-carved valley of the Merced River. with many trails, viewpoints and facilities. Trail descriptions

Tuolumne Meadows and the Tioga Road
The high elevation backcountry, a beautiful land of lakes, mountains and canyons, crossed by the Tioga Road. Trail descriptions 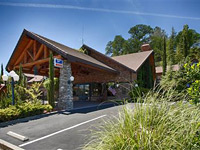 15 miles from the Wawona entrance to the national park; a peaceful hotel with wooded surroundings along Hwy 41, close to shopping and dining

All hotels in Oakhurst - Affiliate disclosure
Yosemite National Park covers a huge area of the western Sierra Nevada mountains in central California and has innumerable lakes, meadows, forests and granite summits with endless unspoilt Alpine scenery. At the center is Yosemite Valley, a half-mile deep depression carved by glaciers during the last ice age, which now has soaring 3,000 foot high domes and many powerful waterfalls, including three of the world's highest. The area received national park status in 1880, as a result of the efforts of the pioneering Scottish naturalist John Muir, and has grown in popularity ever since. The Merced River runs through Yosemite Valley, and is followed either side by two scenic drives, allowing easy access to many viewpoints, picnic areas and trails.

Elsewhere in Yosemite National Park are vast areas of unspoilt and sometimes inaccessible scenic wilderness, as is the case with Kings Canyon and Sequoia, the other national parks in the Sierras. One of two main routes into the backcountry is the road to Glacier Point, a 16 mile drive leading to several excellent overlooks of the main valley, and many footpaths. The other is the Tioga Road (CA 120), along which is a second park visitor center at Tuolumne Meadows - a beautiful region with many small lakes, stark granite peaks, clear mountain streams, waterfalls and meadows with colorful summer wildflowers. An extensive network of trails allow for relatively easy exploration of this splendid landscape.

Woodland trail
There are three groves of giant sequoia trees in Yosemite National Park, two near Crane Flat (the Merced and Tuolumne groves) but the most famous is the Mariposa Grove of Big Trees in the southwest corner, near the private village of Wawona. More than 400 huge sequoias grow over the sheltered hillsides; the largest is the Grizzly Giant, estimated to be nearly 3,000 years old.

The remote northern half of the park is served only by the Hetch Hetchy road, leading to the Hetch Hetchy Reservoir. This was formed in 1923 by construction of a dam to provide drinking water for the people of San Francisco. The dam caused flooding of the lower reaches of the Grand Canyon of the Tuolumne River - said by John Muir and many others to be as magnificent as Yosemite Valley.

Yosemite National Park is 200 miles east of San Francisco; three state roads (CA 120, CA 140 and CA 41) approach from the west and converge on the lower end of the valley. CA 120 continues east across the Sierras via the Tioga Pass, a route that is often blocked by snow until June. No roads cross the mountains south of here for 140 miles. At the western end of the valley where the mountains at either side come close together, the roads become narrow, cut precariously into the cliffsides, and pass through several tunnels - these open to reveal an astonishing vista of vertical cliffs and green woodland, fading into the hazy distance; this is Yosemite Valley, central attraction of the park.

Bennettsville Mine
★★★★★
1.4 miles, 100 feet
Abandoned mine with interesting relics; near Tioga Pass, just east of the national park

Clouds Rest
★★★★★
2 miles, 850 feet
Clouds Rest is a rounded granite summit, 1,090 feet higher than the more well known Half Dome but offering similar, if not better, views of Yosemite Valley and countless square miles of the backcountry

Dog Lake and Lembert Dome
★★★★★
2 miles, 850 feet
Popular trail that ascends through thick pine forest beneath a large granite dome, then levels out and continues north, to the edge of Dog Lake

Elizabeth Lake
★★★★★
2.4 miles, 850 feet
This glacial lake is ringed by grassy meadows and is a good destination for a half day hike

Glen Aulin
★★★★★
5.3 miles, 600 feet
Path that follows the Tuolumne River into a granite gorge, past many deep pools and several waterfalls

Lukens Lake
★★★★★
1 miles, 160 feet
This easy but not too interesting path leads northwards, across a saddle and on to Lukens Lake and its adjoining meadow

Mirror Lake and Mirror Meadow
★★★★★
3 miles, 140 feet (loop)
Path to a seasonal lake that reflects the vertical cliffs above, then on to a moist, long grass meadow

Mono Pass
★★★★★
4 miles, 1000 feet
Woodland, marshy meadows and several streams are encountered on this tranquil trail that climbs steadily to a pass on the Sierra crest

Mount Dana
★★★★★
3 miles, 3100 feet
The steep trail to the summit of Mount Dana, Yosemite's second highest peak, is unofficial but well used and easy to follow

Panorama Trail
★★★★★
4 miles, 1200 feet
Spectacular hike descending steadily from Glacier Point to the rim of a beautiful hidden waterfall (Illilouette Fall), then along the edge of a cliff, which gives views many Yosemite landmarks

Sentinel Dome
★★★★★
1.1 miles, 400 feet
Sentinel Dome is a typical Yosemite summit of bare, rounded granite, rising above the trees near the end of the road to Glacier Point

Sunrise Lakes
★★★★★
3.5 miles, 1160 feet
Three small but pretty lakes on the north side of Sunrise Mountain

Taft Point
★★★★★
1.1 miles, 240 feet
Offering an alternative to the often overly busy Glacier Point, Taft Point has equally good views over Yosemite Valley, 3,500 feet below, and of some nearby rock formations known as the Fissures

Ten Lakes and Grant Lakes
★★★★★
up to 9 miles, 2,170 feet
Two groups of lakes separated by a narrow ridge, set amidst sparkling white granite scenery; within sight of the Grand Canyon of the Tuolumne River

Yosemite Falls
★★★★★
3.6 miles, 2600 feet
This strenuous but well used path climbs the cliffs at the north side of Yosemite Valley, passing over 100 switchbacks, to the top of the highest waterfall in North America

Vernal Fall
★★★★★
1.5 miles, 1000 feet
Wide, busy path that follows the Merced River, past many pools and small cascades, then climbs steeply to the top of a dramatic waterfall

As Yosemite is the preferred destination of three million visitors each year, many of whom do little more than drive around the roads of the main valley and stop to take photographs, this area has become quite congested, and some parts have become spoilt by badly-planned developments, overcrowding & commercialism. In January 1997 severe flooding destroyed half the campsites and one third of the buildings, so it was decided that many would not be rebuilt, and instead the land would be returned to nature. Other improvement measures include a reduction in the number of roads available to private cars and increased use of shuttle buses, as is the case, for example, with Zion Canyon in Utah and the Grand Canyon in Arizona. Still, even in the heart of Yosemite Valley, perfect solitude is only a 30 minute walk away along one of the many trails leading into the wilderness, and despite the overcrowding, the scenic drive along the Merced River is a must for any visitor to California. 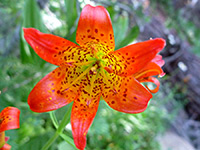