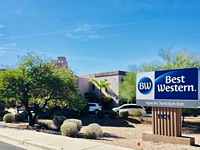 Popular, affordable hotel built in the traditional Southwest adobe style, close to shopping and dining; along the Apache Trail 9 miles from the regional park

All hotels in Apache Junction - Affiliate disclosure
Usery Mountain Regional Park, one of 13 similar preserves managed by Maricopa County in and around Phoenix, contains 3,648 acres of Sonoran Desert flats and small rocky hills, in between the main peaks of the Usery Mountains to the west and the more extensive, and higher, summits of the Goldfield Mountains to the east. Compared to the others, the park is intermediate in character and popularity - quieter than, for example, the large South Mountain Park but busier and less rugged than White Tank Mountain, but like all it is primarily visited by locals, often for exercise and dog walking, rather than tourists, yet the scenery is very impressive, and includes all the main types of desert vegetation - saguaro, Arizona barrel cacti, palo verde, cholla, opuntia, echinocereus and ocotillo; all abundant, growing on coarse, granitic soil with very little other undergrowth, and even the lowland areas are high enough for grand views in most directions.

Pass Mountain
The main facilities of the park are a nature center, 73-site campground, group camp, archery range, fitness equipment, picnic area and 27 miles of well-maintained trails, the majority of which cross flattish terrain. Nearly all the routes are also open to cycling and horseriding. The most famous path is the Wind Cave Trail, which soon exits the park and climbs to a sheltered alcove high on the slopes of Pass Mountain (the westernmost peak of the Goldfield Mountains), the southern summit of which can be reached by an unofficial confirmation.

The regional park lies on the northeast side of Mesa, along Usery Pass Road, which climbs to a low saddle between the Usery and Goldfield mountains then links with the Bush Highway to the north. Although bordered by a residential district (to the south), the region is relatively quiet and scenic, and provides a good introduction to the geology and vegetation of the Sonoran Desert. The short park road passes all the various facilities and ends with a loop around an isolated hill, which is also circled by one of the trails (Merkle, 0.9 miles) and crossed by another (Vista, 0.5 miles). Other popular routes include the Blevins Trail, a 3 mile loop over nearly level terrain, the 1.1 mile Cat Peaks Trail around three sides of a pair of buttes, and the Ruidoso and County Line trails that explore less visited areas to the southeast. All routes intersect, allowing a variety of loop hikes. The two most strenuous paths, both exploring the nearest peak in the adjacent Tonto National Forest, are the 7.5 mile (loop) Pass Mountain Trail, all around the foothills, and the 1.5 mile Wind Cave Trail, described below, which climbs towards the summit.

The popular path to the Wind Cave starts along a short side loop, at a trailhead with restrooms, drinking water and map. The route is signed 'steep and strenuous', though this is a relative description, and the hike holds no great difficulties. The distance to the cave is 1.5 miles, gaining 810 feet. The path very soon intersects the Pass Mountain Loop and heads in a northeasterly direction while ascending only gradually, close to a dry wash. It crosses into the Tonto National Forest, continuing through archetypal desert scenery of granitic sand, rounded boulders and many cacti, becoming a little steeper after about half a mile, as it rises to the base of a line of vertical cliffs of brownish-green volcanic rock, then contours back south on benches, before the final, shorter climb to the cave, a wind-eroded cavity that is always shady, cool and somewhat damp due to minor seeps. Bees cluster around tiny holes in the wall, and the alcove is home to several types of wildflower, one (mabrya acerifolia, or brittlestem) quite rare. A sign warns hikers to continue (only) at their own risk, along the unmaintained path to the eastern summit of the mountain, a route, which although is well enough marked by cairns, is steeper and has some sections where the ground is covered by loose stones. The path crosses similarly rocky slopes to the main trail while ascending another 300 feet to the summit, which affords a fantastic 360 degree view of the surrounding mountains and valleys - see panorama.

27 views along the Wind Cave Trail

Panorama from the southern summit of Pass Mountain

Saguaro on a ridge 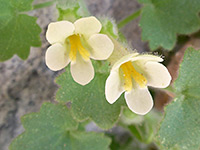