Highlights:
Isolated range of volcanic mountains north of Flagstaff, including the highest point in Arizona, 12,633 foot Humphreys Peak, visible for a hundred miles or more in most directions. Crossed by various roads and trails, and also popular for winter skiing
Nearest city with hotels:
Flagstaff
Management:
USFS - part of Coconino National Forest
Location:
33.346, -111.678 (Humphreys Peak)
Seasons:
All year, though the upper levels are snow-free for only a few months in summer
Rating (1-5):
★★★★★
Weather: 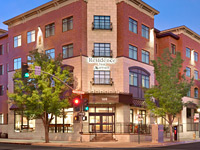 Recently constructed, all-suite Marriott hotel one block from old Route 66 and within easy walking distance of all the attractions of downtown Flagstaff

All hotels in Flagstaff - Affiliate disclosure
Overlooking Flagstaff in northern Arizona, the San Francisco Peaks are one of nine groups of isolated volcanic peaks rising above the flat sedimentary layers of the Colorado Plateau, to a high point of 12,633 feet at Humphreys Peak, the tallest summit in the state. Most of the slopes are forested but the higher reaches extend above the treeline; an expanse of bare rock and basalt scree slopes, unusual scenery for this predominantly desert region.

The other principal summits are Agassiz Peak, Fremont Peak and Doyle Peak, all relatively close together - the main section of the mountains is only about ten miles across, though all around are numerous much lower hills and cinder cones, part of the 1,800 square mile San Francisco Volcanic Field. The main peaks, snow-covered until midsummer, are a landmark across a hundred miles or more of northern Arizona and have great importance to the local Native American tribes, especially the Hopi and Navajo.

The peaks are within the Coconino National Forest, and the lower slopes are crossed by many paths and forest tracks, with just a few hiking routes into the high country, by far the most used the 4.8 mile trail to the Humphreys Peak summit. This starts beside the Arizona Snowbowl, a ski center at 11,000 feet, open between November and April. Two other popular areas are the Inner Basin, a sheltered valley below the peaks to the east, and Hart Prairie, a mix of woodland and meadows to the west, contained within a Nature Conservancy preserve. Away from the roads, a sizeable area at the center of the range is protected as the Kachina Peaks Wilderness.

Map of the San Francisco Peaks

Flagstaff lies below the south face of the mountains, with US 89 to the east and US 180 to the west; along here is the paved, 6 mile road to the Snowbowl, the main access point to the high country. The Inner Basin is reached by a 5.5 mile track from US 89, along which are many junctions with other tracks, making this a good place for free primitive camping. Another useful route is the 14 mile Schultz Pass Road, a gravel track linking US 180 and US 89, running partly through a valley between the main section of the range and Elden Mountain, a subsidiary peak to the south. Only the north side of the peaks is less accessible, as here the ground slopes down to jumbled array of volcanic cones and domes, accessed by lesser, rougher tracks.

There is no connection between the peaks and the city of San Francisco; the name originates from a Spanish mission 65 miles east, dedicated to St Francis, founded in 1629; the mountains are clearly visible across the plains, and were named by the friars later in the 17th century. The slopes span 5,000 feet of elevation, representing four ecological zones, from ponderosa pine forest at base, through mixed conifer and subalpine conifer, with tundra above 11,000 feet, the only instance of this environment in Arizona.

Humphreys Peak Trail
★★★★★
4.8 miles, 3,360 feet
Well-used path that swtichbacks up through pine woodland to a rocky ridge then follows this to the highest summit in Arizona
Nearby places
Similar places
Red Mountain - cinder cone within the San Francisco Volcanic Field