Parowan Gap is a stream-carved, three mile-long passage through the Red Hills, a low range of colorful, uplifted, inclined sandstone which rises above Parowan Valley in southwestern Utah. The hills lie along the western edge of the Colorado Plateau - further west is the great flat expanse of the Escalante Desert, part of the Great Basin, while to the east, beyond the valley, are the much taller Hurricane Cliffs.

Besides the interesting geology, which is accompanied by a collection of fossilized dinosaur footprints from the Cretaceous period, the gap is most famous for hundreds of well preserved petroglyphs, adorning the rocks either side of the narrowest section, at the western edge, and ranging in age from 700 to nearly 5,000 years. The petroglyphs extend for 600 feet and may be viewed from a short trail; the largest groups are fenced off for protection though are still clearly visible, and there are many smaller designs nearby.

All land hereabouts is managed by the BLM, who recently (2014) installed new trailhead facilities, both for the petroglyphs and the dinosaur print fossils; the place is also a popular location for free primitive camping, along several short tracks within the hills.

Rocks in the Red Hills comprise some of the more recent strata of the Colorado Plateau, principally, from old to young and west to east, Navajo sandstone, Carmel Formation, Iron Springs Formation (in which are found the fossils), Grand Castle Formation and Claron Formation. The gap was formed by an ancient stream which steadily eroded downwards as the hills gradually buckled due to folding and were later pushed upwards by movement along a north-south fault which also deepened Parowan Valley to the east. Although water does occasionally flow through the valley during heavy rainfall, the permanent stream has long since disappeared, perhaps due to increasing aridity of the climate, leaving the dry valley, which is very narrow at the western edge of the hills, just 80 feet across at ground level, but up to one mile wide beyond, cutting through the undulating hills before exiting to Parowan Valley, beside Little Salt Lake, a shallow, transient body of water up to five miles across.

Path to the fossils

The west end of Parowan Gap is visible from several miles away while driving along Hwy 130 north of Cedar City, and is reached by a paved, lightly-traveled side road linking with the town of Parowan, along I-15. A few tracks join from both sides just west of the hills, also potential camping places, with grand views of the Escalante Desert. The petroglyphs are found on the rocks of the narrow, westernmost part of the gap, through the Navajo Sandstone layer, here a rich yellow-brown color, with darker patina on many of the exposed surfaces. There are two parking places, either end of the narrows on the north side of the road, linked by the path. To the south are various smaller panels, some mixed with inscriptions from the late 19th and early 20th centuries. The largest panel (the 'zipper glyph') is accompanied by a notice and diagram explaining the meaning of some of the designs, in this case depicting events along a great journey. Other panels contain astronomical elements, hunting scenes, people and geometric shapes.

East of the petroglyphs, the valley becomes much wider, and less rocky, as the road descends gradually, reaching the dinosaur print site in 2.1 miles, at the end of a short track, on the north side. A path leads a little further to a group of boulders, a few of which contain the fossilized prints, made by three-toed creatures, hadrosaurs and theropods. The fossils are not obvious and might not be identifiable were it not for BLM-installed metal signs next to each one, and at least two of the largest are incomplete, having lost one of their toes. Short tracks lead to other rocks, on the valley floor and up the slope, and some of these may also have prints. There are no in-situ fossils, since all boulders have fallen from the line of cliffs above, so presumably many more prints exist across these rocks. East of the prints, the road soon leaves the Red Hills and runs past the south end of Little Salt Lake, which is pretty to look at from a distance though not so appealing close up, due to smelly water and muddy banks. An unpaved road follows the west edge, past a few houses; at the start is a notice about private land on both sides, so hiking, or camping, is not permitted in this area.

22 views of the petroglyphs and fossils 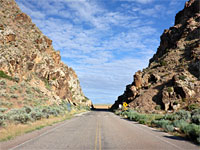 Road through the gap