Loop trail first reaching Manzanita Spring, which supplies water to nearby Frijole Ranch, then climbing grassy hills to the more secluded Smith Spring. Return is via another path over open slopes, with views of the desert lowlands

The best trails in Guadalupe Mountains National Park climb several thousand feet into the wooded high country but there are several easier paths with only minor elevation gain, such as the 2.3 mile loop to Smith Spring, a sheltered oasis in a patch of oak woodland at the foot of Frijole Ridge. The trail also visits a second spring (Manzanita) and for most of the way traverses open grassy slopes with good views of the Chihuahuan Desert to the south.

The trailhead is at Frijole Ranch, reached by a short gravel side road forking off US 62/180, 1.5 miles east of the main park entrance at Pine Spring Canyon. The ranch is a restored homestead, originally built in 1876 though most construction took place in the 1920s by the Smith family, and it remained in use until being sold to the NPS in 1966. The main house now contains a small museum about settlement and ranching in this challenging desert location.

The access road ends at a small parking area next to the white ranch house and its collection of outbuildings. There is usually a ranger in attendance. Three trails start here - the Foothills Trail southwards and the Frijole Trail to the west, both leading to the park headquarters, and the Smith Spring Trail to the northeast. The first 0.2 miles of this is paved, as far as Manzanita Spring, a shallow reed-lined pond in a grassy area quite close to the house; drinking water for the ranch is supplied via a metal pipe. From here the path climbs gradually up the hillside, which is sparsely covered with yucca, sotol and bushes, towards a patch of trees in a small ravine, location of the smaller Smith Spring. Nearby to the east are two other springs (Juniper and Choza), and there is another not far to the west (Upper Pine), hence this area has long been a favored location for settlers, and the surroundings show evidence of habitation dating back many centuries. One mile from the trailhead, the path crosses a streambed and enters the mixed maple/oak/pine woodland around the spring, which in dry weather consists of a series of shallow pools draped by maidenhair ferns and other water-loving plants. In wetter conditions a stream flows a little way above and below, over mossy, leafy slopes, but the water still sinks underground after a short distance, before resurfacing lower down the hillside at Manzanita Spring. Smith Spring is a good place to spot wildlife, especially towards sunset - creatures that may be seen include birds, lizards, javelinas, mule deer and elk. The return part of the loop is similar to the outwards section, over open, treeless ground and across several dry washes, descending slowly back to Frijole Ranch. The Frijole Trail branches off westwards near the end. 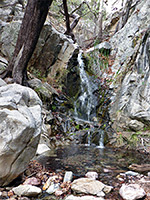 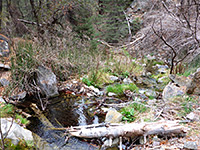 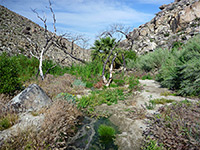 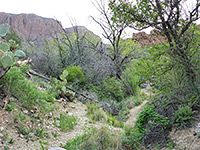