Rewarding loop hike to an 8,368 foot summit at the edge of the mountains - up a steep, narrow, sheltered ravine (Bear Canyon), through the pine woodland of the Bowl, and down an exposed ridge above Pine Spring Canyon

Trailhead: Far side of the NPS campground

Three of the Guadalupe Mountains' major summits are reachable by maintained trails; Guadalupe Peak (the tallest), Bush Mountain and Hunter Peak, at 8,368 feet only the fifth highest in the national park, but still giving spectacular views from the top - half the panorama is of the vast desert to the south, and the remainder is of other mountains and the sheltered pine forest of the Bowl to the north.

The hike to the summit involves climbing 2,540 feet, along two trails - either the first 3.3 miles of the Tejas Trail up the side of Pine Spring Canyon, or the lesser used Bear Canyon Trail along the next ravine to the east. These two routes are linked by the Bowl Trail, from which a short spur leads to the Hunter Peak summit, hence the trip can be done as a loop up one trail and down the other, a total hike of 9 miles.

The Bear Canyon Trail is much steeper and rockier so the NPS suggest the walk is best done in the clockwise direction, though this drainage is also more shaded, both by trees alongside the path and a high ridge to the east, so in the morning much of the route is in shadow therefore the anti-clockwise direction is perhaps better - this is the hike described below. Although less steep, the Tejas Trail has extended switchbacks over exposed, treeless slopes with no shade, so the ascent is strenuous in warm weather.

13 views of the trail to Hunter Peak.

Start point for the hike to Hunter Peak is the parking area/campground in Pine Spring Canyon, half a mile from US 62/180. From the trailhead, the Tejas Trail forks right at the first junction, crosses the canyon wash then reaches a second junction, with the Frijole Trail from Frijole Ranch. Turning right again, this path traverses grassy hillsides above the visitor center and soon arrives at a third junction, with the Foothills Trail that stays fairly level, leading to the Frijole Ranch Road. The Frijole Trail bears left (northwards) and starts to climb, across sloping land that has no trees or bushes so already affords good views along the highway and over the desert to the south.

The path winds in and out of a few small dry washes before arriving at the larger streambed of Bear Canyon, where the trail to the Bowl and Hunter Peak branches off to the left. Above, the drainage runs through a thin corridor of trees in a steep, narrow ravine extending all the way from the low foothills to the plateau near the summit; the path starts off on the west side, crosses over after a while then stays on the east side the rest of the way. The middle part is the steepest, and quite rocky underfoot, but the ravine is narrowest here, filled with trees and so well shaded from the sun. Near the top, the path rises higher above the streamway, beyond the trees, through a few switchbacks though most is directly up, hence the distance is only 1.5 miles, about half that of the less steep Tejas Trail to the west, which makes the same climb. For much of the way the path follows a broken iron pipe, leading to a disused water tank on the plateau above, located a short distance east of the next junction; the Bear Canyon Trail ends at an intersection with the Bowl Trail, which loops around a section of the conifer forest in the secluded basin to the north.

The route to Hunter Peak is along the westwards section of the Bowl Trail, climbing fairly gently up a shallow, wooded valley, to the start of the 0.3 mile spur path to the summit. This ascends a series of limestone strata to the bare rock summit, from where the view is completely unobscured by trees. The panorama is not quite as good as from Guadalupe Peak, 381 feet higher on the opposite side of Pine Spring Canyon, as the land to the north is rather nondescript - woodland and low relief summits, whereas Guadalupe has long distance views in all directions. Clusters of echinocereus cacti grow on top of Hunter Peak, a little frost damaged due to the cold winters at this high elevation, but still capable of producing bright red flowers in springtime. Back on the main trail, the route descends a little through the pine/fir forest to the next junction, a four way intersection with the Tejas Trail left and right, and the Bush Mountain Trail straight on. There is a hitching post for horses beside the path - the Bowl Trail is not for livestock, unlike the other routes.

Conifer woodland in the Bowl

The descent along the Tejas Trail is gentle at first, still through wooded land out of sight of the valley below, but this soon comes into view as the path rounds a promontory and reaches the edge of the plateau. This being a horse trail, the gradient is rather less than the Bear Canyon Trail, and the path has long switchbacks while descending relatively slowly. An intermediate ridge is reached after a 1.8 miles, not far above the limestone narrows of Devils Hall, followed by a long, curving descent around a bowl-shaped hillside to the flat land around Pine Spring wash. The final section is level, running alongside the streamway back to the junction with the Frijole Trail, from where the campsite/trailhead is 0.2 miles south. The 9 mile round trip can be done in less than 4 hours, but 6 to 8 hours is more typical. 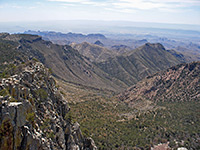 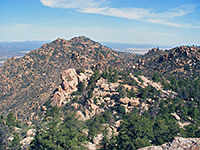 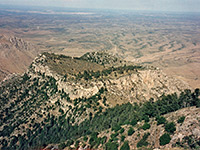