Slot Canyons > Other Locations
Other slot canyon locations in the Southwest.

Apache Trail Canyon, Arizona
★★★★★
0.5 miles, 200 feet
Minor drainage beside the Apache Trail in the Superstition Mountains, which is enclosed for nearly a mile and forms a short, shallow slot canyon, containing pools and dryfalls

Blue John Canyon, Utah
★★★★★
8 miles, 600 feet
Deep, branched slots in a remote but scenic region near the Green River and Canyonlands NP. Some parts require rappelling and/or difficult downclimbing, to pass dryfalls of up to 70 feet, but most can be seen by hiking and scrambling 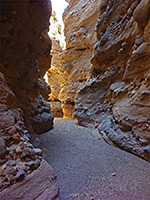 Professor Creek, Utah
★★★★★
4 miles, 600 feet
Permanent stream flowing along a shallow but pretty canyon, narrow for nearly 2 miles, through colorful reddish rocks. The walls have interesting textures and colors, different to most true slot canyons as the sandstone is darker, harder and less striated

The Slot, Anza-Borrego Desert SP, California
★★★★★
0.5 miles, 50 feet
The Slot is a minor drainage in the Borrego Mountains, reached by a dirt track, and notable for about half a mile of quite pretty narrow passages through grey-brown conglomerate rocks

Spooky Canyon, Lake Mead NRA, Arizona
★★★★★
0.9 miles, 50 feet
Minor drainage through the hills bordering US 93, on the east side of Lake Mohave; contains a third of a mile of pretty passageways, with overhanging rocks and a natural bridge
The hardest-to-reach group of Utah slot canyons are found along the Dirty Devil River, north of Lake Powell, mostly on the east side where access is more difficult. Main locations are Happy Canyon, Larry Canyon, Sams Mesa Canyon and various forks of Robbers Roost Canyon. North of here is another group including Blue John Canyon, also with several branches, and Moonshine Wash, while to the west, Moab has some narrow canyons though the rocks hereabouts are not generally conducive to slot formation. Professor Creek is one nice drainage in this region.


True slot canyons are restricted to the Colorado Plateau and even here only in certain types of rock (mostly the Navajo, Wingate and Cedar Mesa strata) but narrow ravines are still found elsewhere throughout the Southwest. In central Arizona, below the Mogollon Rim that marks the southern edge of the plateau, the many streams and creeks that flow down from the high country often erode sheer sided canyons, not continuosly narrow but with enclosed sections, often flooded, containing chokestones, waterfalls and the added attraction of large cacti, including saguaro in many of the lower elevation drainages. The amount of water and hence ease of exploration varies a lot throughout the year, though often access is always difficult owing to the remoteness and roughness of the surrounding terrain, so some are never very easy to follow. There are several well known canyons in and around Sedona, including West Clear Creek and Wet Beaver Creek, but most of the best are further south - Tonto Creek and tributaries, Aravaipa Canyon, Salome Creek, Cibecue Creek, the Salt River and countless others.

The California and Colorado mountains have similar gorges, with waterfalls and V-shaped channels but no true slot canyons. The California deserts do have some though. One type are found in low elevation canyons which experience flash floods, where narrow channels can be formed - the most well known are in Death Valley which has a variety of narrow twisting ravines with unusual strata but many less well known valleys have other examples. Another type is found in conglomerate rocks such as in Anza-Borrego Desert State Park, which have erosional properties similar to sandstone and also form quite narrow slots, though they tend to be quite short.

Further afield, another interesting area is in and around Big Bend National Park in Texas, where the Rio Grande River flows through a series of deep gorges, with narrow side canyons.