Highlights:
The oldest state capitol in America, containing many historic buildings, concentrated around the central plaza. Much can be seen by a leisurely walking tour along the tree-lined streets of the town center
Nearest city with hotels:
Santa Fe
Management:
City of Santa Fe
Location:
35.687, -105.938 (the Plaza)
Seasons:
All year
Rating (1-5):
★★★★★ 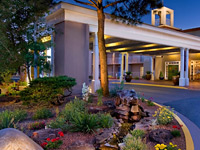 One of the most central hotels in Santa Fe, just three blocks west of the Plaza, within walking distance of numerous shops, restaurants, bars & galleries

All hotels in (downtown) Santa Fe - Affiliate disclosure
This website is about landscapes, but Santa Fe is well worth a mention - it is the most attractive and historic town in the Southwest, and the oldest state capitol in the US, founded in 1610. The centre has a charming small-town feel, with all the main shops and old buildings within walking distance of each other, and the distinctive adobe architecture is used almost universally - houses are painted in subtle, officially-approved shades of pale brown, with characteristic clay walls and protruding wooden ceiling posts. Banks, restaurants, art galleries, the police station, even the local McDonald's - all are built in the same style.

The old part of town extends for just a couple of miles; this is surrounded by the kind of typical suburbia that could belong to any American city. The Sangre de Cristo Mountains rise over the town to the east, the southern end of the great Rocky Mountain range, and Santa Fe itself has a relatively high elevation of 7,000 feet. Summers days are warm, but nights generally cool, and it is in summer that the natural light is most clear and pure, special qualities that have long attracted artists to this area.

Jewelry sellers outside the Palace of the Governors

The railway station is a good place to start a tour of Santa Fe, if only because there is a large free carpark, and lots of colorful trains to inspect. Town centre is 3/4 of a mile northeast; the walk passes many of the art shops for which the town has become famous - these sell paintings, Southwest jewellery, antiques and Indian crafts. Most main roads converge at the Plaza, a grassy square surrounded by historic houses including the Palace of The Governors, the oldest public building in the US (dating from 1610), now used as a museum of local history and culture. This is also a prime location for the sale of Indian turquoise jewellery and other native artefacts. Various other museums are close by, mostly connected with fine arts and local culture. Elsewhere, landmarks include City Hall, the Cathedral of St. Francis of Assisi. and the Our Lady of Light Chapel, famous because of its free-standing spiral staircase which was built without any visible support supposedly by a mysterious visiting carpenter, believed at the time to be St. Joseph in disguise.

The atmosphere is very peaceful, especially in the central Plaza - a great place to sit and rest for awhile, on cool grass beneath shady trees. The surrounding streets are fascinating to explore, with narrow passageways and hidden courtyards, and are often decorated with bunches of fiery red dried chillies, one of the symbols of New Mexico. Many of Santa Fe's streets were unpaved as recently as the 1970s, and even today the area has a distinct old time ambience.