Highlights:
The world's largest travertine natural bridge, formed by a small stream flowing through a shady canyon in the wooded foothills of the Mogollon Rim. Viewable by several short trails
Nearest city with hotels:
Payson, 13 miles
Management:
Arizona State Parks
Location:
34.320, -111.456
Seasons:
All year, but may be closed on some days during winter
Rating (1-5):
★★★★★
Weather: 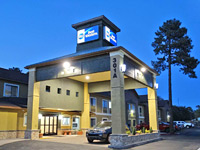 Interior corridor hotel offering free hot breakfast and an outdoor pool; 13 miles from Tonto Natural Bridge in the center of Payson, along Hwy 87

All hotels in Payson - Affiliate disclosure
Steep hills and canyons make most of the wooded land towards the north of the Tonto National Forest quite inaccessible, and the few paved roads are rather winding and not conducive to speedy cross-country travel. In one of the narrow V-shaped ravines that stem from the Mogollon Rim, a series of underground springs with mineral-laden waters have built up large deposits of travertine (calcium carbonate) through which Pine Creek, a year-round stream flowing through the canyon, has eroded a passageway leaving the rocks above standing a natural bridge. The formation has been protected as the Tonto Natural Bridge State Park since 1990.

The natural bridge was discovered by David Gowan, a Scotsman, in 1877 while hiding from Apache Indians, and so impressed was he by the unusual, secluded location that he persuaded his family to emigrate and live there. Although they left in 1948 their lodge remains - since being included in the National Register of historic places - and forms the centerpiece of the buildings in the state park, which is reached by a short, paved side road (FR 583) that forks off AZ 87 11 miles north of Payson - this crosses a plateau sparsely covered by wildflowers and small trees, then drops steeply 800 feet to the canyon floor. The bridge is not immediately apparent, as beyond the park buildings stretches a flat meadow that seems to cover all the ground between the canyon walls. The creek actually runs a hundred feet below in a narrow gorge, the edge of which is hidden by trees, flows under the bridge beneath the meadow and continues downstream through a rather wider canyon. Depending on which dimension is used as a measurement, Tonto is the world's largest travertine bridge - 180 feet high, 400 feet long and about 100 feet thick on top.

Downstream of the bridge

The opposing sides of the valley receive unequal amounts of sun and exhibit very contrasting vegetation; thick pine trees on the northwest facing slopes but yucca, cacti and bushes on the southeast side, plus a variety of colors of exposed sandstone rock. A large number of bird species live in the different habitats, and besides watching them, the park is popular for picnics and hiking. One could probably explore the area by following the creek up or downstream for a few miles, or climbing the adjacent cliffs, but the official options are viewing the bridge from various overlooks and walking along three short trails that start from the central meadow:

Caves in the travertine

South side of the bridge