Arizona contains over a dozen drainages named Black Canyon; the one described here is a tributary of Burro Creek in the northwest, in Mohave County, running for around 15 miles across low elevation, Sonoran Desert land, close to US 93 between Wickenburg and Kingman.

The majority is shallow and uninteresting, but one exception is a 2.5 mile stretch towards the middle, where the drainage crosses an area of volcanic rocks - rhyolite and andesite deposited by lava flows between five and ten million years ago - as here it forms quite a scenic gorge, up to 300 feet deep. A small stream flows part of the way, originating from a spring towards the upper end of the canyon, all of which is filled with the usual, varied collection of desert plants including plenty of saguaro. The canyon floor is mostly covered by coarse, light-colored sand, dotted with gray basalt boulders, while the sides are black or dark red, so the place is photogenic, and the pristine scenery is only slightly spoilt by cattle, who roam throughout the whole area.

The canyon contains no obstacles; the floor is wide, flat and not too overgrown so a walk through the scenic, enclosed section (5.8 miles round trip) makes for a good half day hike, with easy access from US 93.

The lava gorge is reached by an unpaved track, 17 Mile Road, on the west side of US 93 three miles south of the bridge over Burro Creek, this another deep gorge, containing rather more water. Just before the road crosses Black Canyon (downstream of the gorge), another track, still fine for most vehicles, branches off to the south, following the drainage, crossing a tributary after 0.8 miles then the main streambed soon after. A suitable parking place is just before the tributary. All tracks hereabouts have many good places for free primitive camping.

Basalt boulders in the sandy streambed

After the tributary, which is soon followed by a second on the opposite side, the Black Canyon streambed winds through a broad bend lined by low rocks, then turns back east where the canyon proper begins, as the land rises quite steeply on both sides. In a bushy area outside of the bend is an abandoned shack plus several other structures, once a dwelling, and still containing the former owner's possessions. The canyon twists and turns several more times, as three more tributaries join and the cliffs reach their maximum height. The somber, jagged, dark-colored rocks contrast with the clean, light-grey sand in the streambed and the bright green vegetation alongside, sprinkled with wildflowers in spring and early summer. The canyon straightens out after 1.4 miles, a section that contains the source of the stream at Black Canyon Spring, above which streambed is dry, the vegetation less, and the walls begin to recede. The lava deposits end just after a south-side tributary, and this is soon followed by another junction in the canyon, beyond which both forks cross low desert land without any more cliffs. 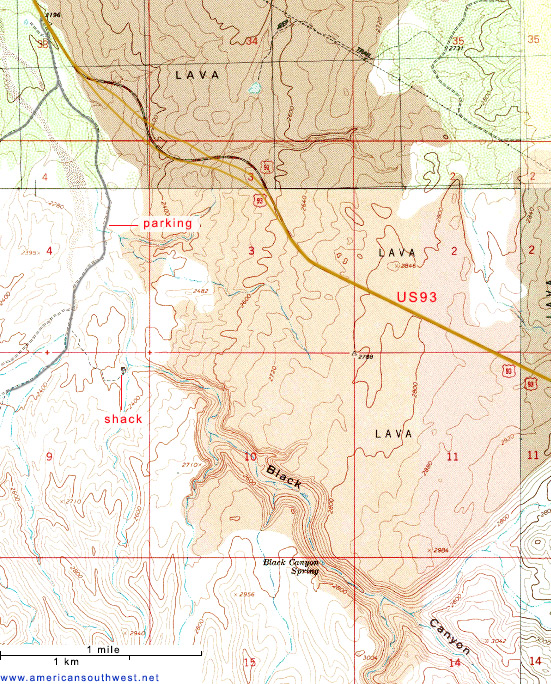 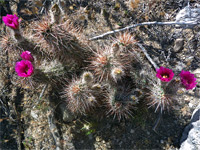