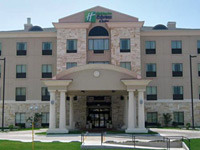 13 miles from Amistad Dam; a popular hotel with outdoor pool, one mile north of downtown Del Rio, close to many shops and restaurants

All hotels in Del Rio - Affiliate disclosure
There is not too much to see around Lake Amistad - it is a reservoir along the Rio Grande, large in area but rather less scenic than some of the other lake-centered Southwest recreation areas in far away Utah and Arizona such as Lake Powell, Lake Mead and Flaming Gorge.

Amistad began to fill in the late 1960s after a dam was built near Del Rio, the last town of any significance along the river before El Paso, 680 river miles further west. The lake has many branches, which in places are bordered by gently sloping grassy banks, in others by short, vertical cliffs of greyish limestone. Access to the shoreline is rather restricted and recreation is mostly limited to water-based activities, principally fishing, scuba diving and boating.

The six mile long Amistad Dam has backed up water for about 30 miles upstream, as far as the junction of the Pecos River with the Rio Grande. Approaching from the west, the first place of interest is Seminole Canyon, a State Historical Park, which preserves many Indian rock paintings up to 4,000 years old, found amidst the many remote, rocky gullies that cross the desert land near the river. All sites can only be visited if accompanied by a park ranger, however, and to reach most requires several hours hiking over rough ground. The park also has a good campground and various other trails, including a 3 mile path to the reservoir.

Not far south, Amistad Reservoir begins to widen and the shoreline breaks up into countless submerged tributary ravines, quite inaccessible by land. Large areas of the lake are in Mexico, including four major flooded canyon branches, each several miles long. Most access points are to the north part of the reservoir, above US 90; this section includes the lower end of the Devils River, quite a large Rio Grande tributary. Near the road bridge, Diablo East Marina has the expected boating facilities and a campsite nearby, while 33 miles away by road the Rough Canyon access area has another marina, higher cliffs and generally more scenic surroundings. There are six other widely separated roads to points along the shore but all with few or no facilities.

The water is clean and warm, and although there are few beaches - the shoreline is mostly muddy or stony, the lake is fine for swimming and sunbathing. Another popular activity is scuba diving, since the water is unusually clear, and the lake hides many interesting underwater rock formations including submerged caves. Southern Texas is hot most of the year; the temperatures at Amistad may pass 100°F for several months in summer, so the cooling waters are most welcome.