Major drainage running for over 30 miles alongside UT 95; moderately narrow for most of its length and forming several slot sections, in particular the permanently flooded Black Hole. May have long pools in many other places, as the canyon channels a great amount of water after rainfall

Length: (Black Hole) 5 miles between the two trailheads (plus another 1.5 miles along the road); 2 miles to reach either entrance

Difficulty: Easy to moderate for most of the canyon; strenuous if swimming through the Black Hole

Season: Summer, if wading or swimming; spring and fall are best for hike-only trips

Trailhead: Parking areas on the east side of UT 95; southeast, northwest

White Canyon starts in the foothills of the Abajo Mountains and joins the north end of Lake Powell near Hite after about 45 miles, passing through Natural Bridges National Monument en route. The upper stretches are quite shallow but the gorge soon becomes wide and deep, bordered by crumbling red and white cliffs at either side - a scenic backdrop to UT 95, the Utah Centennial Highway, which winds through the canyon.

A narrow ravine cuts into the middle of the main valley floor, several hundred feet deep in places and although mostly quite open, some parts are more slot-like, especially the Black Hole, a permanently flooded section of 500 feet where the smooth grey/brown Cedar Mesa sandstone walls are just a few feet apart. A trip through here is one of the premier canyoneering experiences in Utah.

Hazy reflections on the surface of a long pool

All of White Canyon is easily accessible from UT 95 since the inner gorge is never more than one mile from the highway. There are many possible entrance routes, and all of the 30 miles below the national monument are worth exploring; the most exciting section though, which includes the Black Hole, is close to Lake Powell - alongside the road, between mileposts 55 and 57. Near each post is a small parking area and a well used trail heading north; both paths reach the floor of the gorge after just half a mile, entering via a short side canyon. A journey all the way through typically takes 5 to 7 hours, though the frequent flash floods sometimes deposit large amounts of logs and other debris, which can make conditions more challenging. One such obstruction that formed in the Black Hole in 2004 took several years to fully clear, and on some occasions the narrows may be completely impassable for weeks or months at a time.

Parking for the western (downstream) approach to the Black Hole is on a flat area beside the road near milepost 53, not signposted, but within sight of the notice marking the Glen Canyon National Recreation Area boundary. The partly cairned route begins down a little valley - the lower end of a small wash opposite a rocky hill, heads upstream a short distance then drops down a steep, boulder-filled gully. It traverses a way and completes the descent to the canyon floor, here covered by a mix of stones and sand, and enclosed by the thick strata and jumbled boulders typical of this drainage. Turning upstream, a side ravine soon joins from the south, offering an alternative but slightly more difficult entrance/exit route, then the canyon floor becomes mostly slickrock for a while, until a big boulder preceding a twisting, flooded channel which catches large amounts of driftwood and flood debris. Beyond are more jumbled boulders, some very large, and the best way ahead may not be evident, unless marked by footprints. A small seep to the south produces drinkable water, sustaining flowers and green moss. The canyon narrows somewhat, bends a few times and now has little or no vegetation - the floor is either bare rock or pebbly sand. A little arch is visible high up on the north side.

Boulder, log and pool
Several other groups of large boulders, between more open stretches, are followed by a photogenic section of elaborately fluted and eroded sandstone, carved over the millennia by the seasonal flood waters. Next is another long straight passage, and a pile of fallen boulders, beyond which pools start to appear. The walls become closer and the canyon is noticeably cooler and more shaded, still with a few boulders in the streamway, before a longer pool, a brief sandy stretch and then the Black Hole. In some parts of the canyon the flood waters flow through a narrow but shallow inner gorge, enabling the slot to be bypassed by walking on benches at either side, but for some distance east or west of the Black Hole the walls are sheer, hence wading and then swimming is the only way to continue. The dark grey color of the water hints of its permanence, and the sunless passages keep the temperature of the pool very low, no more than 50°F (10°C) even in midsummer.

The 3 mile section of White Canyon with the best narrows may also be explored in the downstream direction, starting from milepost 57 of UT 95; this is the main trailhead, and for a while had a BLM noticeboard, though this has apparently been removed. The short approach path descends via a steep boulder-covered slope into the canyon, which at this point is 600 feet deep but relatively wide; the walls close in after about 20 minutes walking northwards. The canyon then has flat areas interspersed with smooth channels, occasional sheer drops of up to 10 feet and many intricate water-carved features; it gradually becomes deeper with mostly vertical walls that allow some places to climb above the streambed but no escape routes to the plateau above. The rocks are whitish grey, often stained black, and the passageways are enclosed and rather gloomy - this is not a particularly photogenic canyon. The pebbles and boulders on the streambed are more colorful and include many specimens of petrified wood, some complete cross-sections over 6 inches in diameter. White Canyon is usually dry except for occasional deep potholes but during the flash flood seasons of spring and late summer the streambed retains numerous muddy pools 2-3 feet deep, and flowing water persists for several days after heavy rain. Falls become closer together and the channels narrower before the Black Hole and its long pool of deep, cold, muddy water.

White Canyon is one of the top 25 slot canyons 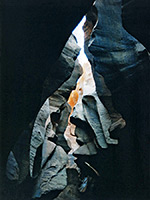 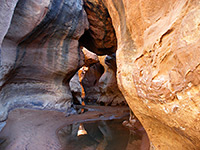 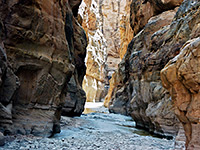