Highlights:
Historic ranch, a cactus garden and a popular campground, at the edge of a wide valley next to the foothills of the Sacramento Mountains. Park also contains the start point for the Dog Canyon Trail, which climbs a cactus-filled ravine high into the mountains
Nearest city with hotels:
Alamogordo, 12 miles
Management:
New Mexico State Parks
Location:
32.747, -105.914
Seasons:
All year. Hot in summer
Rating (1-5):
★★★★★
Weather: 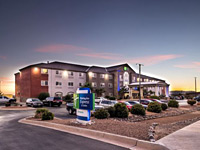 A south Alamogordo hotel with fitness center and outdoor pool, along White Sands Blvd near the US 54 intersection, 11 miles from the state park

All hotels in Alamogordo - Affiliate disclosure
At the foot of the Sacramento Mountains southeast of Alamogordo, Oliver Lee Memorial State Park commemorates a 19th century rancher and legislator (Oliver Milton Lee; 1865-1941), who was an influential figure in the development of this arid, sandy region; the mountain tops may be cool and moist but most of the surroundings are desert land, part of the vast Tularosa Valley that includes White Sands National Monument, 15 miles west. Lee's ranch house is preserved, and nearby is a small museum about local history but for most people it is the scenery that provides a reason to visit, as the state park also has a particularly nice campsite, set amongst cacti with great views westwards across the valley, and also because the trailhead for the 5.5 mile Dog Canyon National Recreation Trail is located nearby.

From the valley floor at 4,400 feet this well established path climbs steeply along a limestone ravine and up the cliffs beyond to a 7,540 foot summit, giving even better views of the landscape, and passing a great variety of Chihuahuan Desert plants en route. For those not making the full trip to the end (a point also reachable by forest roads), two worthwhile targets are a promontory after 0.6 miles and a sheltered cactus basin at the head of the ravine after 2.5 miles. Only the first 0.3 miles of the trail are in the state park; the remainder is through the adjacent Lincoln National Forest, though all hikers must pay the entrance fee of $5 (2020) to access the trailhead.

Oliver Lee State Park is reached by the 4 mile Dog Canyon Road, forking eastwards off US 54, ten miles south of Alamogordo and 75 miles north of El Paso; a quiet, country road across flat land passing a typical collection of ramshackle residences, and ending with a short climb into the Sacramento Mountains foothills, to the visitor center and campsite, situated right at the edge of the steep slopes surrounding Dog Canyon. One other attraction of the park is a small but densely populated desert garden containing many types of cactus, yucca, agave, wildflowers and blossoming shrubs, all of which attract butterflies and humming birds during spring and summer. Besides the long trail to Dog Canyon there is also a nature path and another short loop around the remains of a cabin and walled enclosure, built in the 1880s by an early resident (Francois-Jean Rochas, known as Frenchy). Oliver Lee's ranch house is 1.6 miles south but this is not generally open, being viewable only on weekend, ranger-led tours; at other times the access road is closed to vehicles though still reachable by hikers. The campsite, just south of the visitor center, has 44 well separated sites, some with electric hookups, all with shelters and/or picnic tables.

The Dog Canyon hike begins behind the state park visitor center and is steep from the start, leading up a stony hillside where the surface underfoot is rather slippery because of loose pebbles and slickrock. The trail switchbacks up beneath a promontory then bears right, along a small gully to a plateau (the 'First Bench'), after 0.6 miles and 500 feet of elevation gain. The views are already good but better if walking off trail a short distance, to the edge of the promontory, where all of the lower end of Dog Canyon can be seen, as well as a 180 degree panorama across Tularosa Valley and White Sands. The exposed limestone terraces hereabouts have especially varied collections of cacti and other plants including different species of echinocereus, mammillaria, opuntia and agave. The path continues along the ravine further into the mountains, always staying quite high above the streambed, the lower end of which contains cottonwood trees, ferns and other greenery, nourished by a spring, in contrast to the dry, desert nature of most of the canyon. The ground stays fairly flat for a while before a long, steady ascent, round a few side drainages and up to the Second Bench after 2.5 miles - distances are recorded by marker posts at quarter mile intervals. The terrain is now grassy and flat once more, sprinkled with large limestone boulders and home to a forest of aged cholla cacti, up to ten feet tall. The basin is surrounded on three sides by tall cliffs since this is near the upper end of the ravine; the enclosing rocks are quite impressive, formed of weathered, thin-layered strata reminiscent of some parts of the Grand Canyon, although not as colorful (see panorama). The path crosses to the north side, climbs a little then cuts back northwest, angling up the side of the cliffs while gaining another 1,000 feet before turning east and traversing less steep, partly wooded ground to the end point, at the junction with Forest Road 90B. This location is 2.5 miles along a rough track from a junction with the better quality FR 90 (West Side Road), an 18 mile drive from US 82. 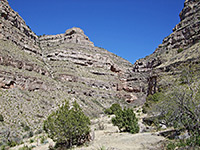