Other Activities
Eight hiking trails, ranging in distance from 0.1 miles to 7.7 miles, plus backcountry caves and other areas, including Rattlesnake Springs, site of an oasis and picnic area
Featured Hotel 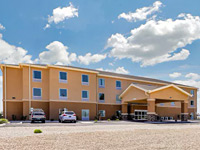 The southernmost hotel in Carlsbad, and so the closest (22 miles) to Carlsbad Caverns. Adjacent to one restaurant. Hot breakfast is complimentary

All hotels in Carlsbad - Affiliate disclosure
The Guadalupe Mountains span the Texas/New Mexico border and rise to heights of 8,749 feet, in great contrast to the flat Chihuahuan Desert land all around. Two national parks are found within their range; Guadalupe Mountains (in Texas), which features rocky peaks and scenic valleys with varied wildlife, and Carlsbad Caverns, one of the oldest and most famous cave systems in the world.

The caverns are a full day's drive from any of the other major attractions in the Southwest, but are well worth the long journey - they include several vast underground chambers, up to 250 feet high, filled with amazing formations of many colors and shapes.

A long straight road is a common feature of the Southwest, and the caverns are reached by one such route; US 62/180 that links Carlsbad with El Paso. The western stretches in Texas pass 100 miles of salt flats, sandy wasteland and grassy prairie before the forested Guadalupe Mountains come slowly into view, then, after a steeper and more winding section, the highway straightens out again, crossing more desert flats towards Carlsbad. The turn-off to the national park is marked by a collection of Western-style souvenir shops, restaurants and lodgings, known as White's City, including the last gas station for 130 miles westwards. From here a rather narrow and winding side road climbs for 7 miles through a shallow limestone gorge (Walnut Canyon) that has attractive rocky scenery with particularly abundant Chihuahuan Desert plants such as agaves and opuntia cacti. There is no campground in the park, and the only official site nearby is the rather pricy establishment at White's City, though free primitive camping is possible along several dirt tracks heading east from US 62/180, a few miles south of the park junction.

The entrance to Carlsbad Cavern is on the plateau at the south side of Walnut Canyon, where a huge visitor complex has been constructed, with acres of parking and a network of service roads. Inside the main building are a museum, book store, auditorium, cafe, cinema-style counter for purchase of tour tickets, and elevators that provide a short cut into the caverns below. The fee to enter the caves is $6 per person (unchanged for many years), although entrance to the park is free. Other attractions in this section of the national park include the 9.5 mile, one-way Desert Loop Drive (no vehicles over 20 feet allowed) that continues westwards along the plateau top then returns via upper Walnut Canyon, and the one mile Chihuahuan Desert Nature Trail through similar scenery close to the cave entrance, while elsewhere in the park are several longer hiking trails and many secret backcountry caves, a few of which are open to the public, but of course almost all visitors come only for the trips underground in the main cavern.

The usual way to see the formations of Carlsbad Cavern is by one or both of two self-guiding walking tours - Big Room or Natural Entrance - which visit different parts of the chambers. Four other branches of the cave may be explored by ranger-led hikes, for an extra fee (Kings Palace, Left Hand Tunnel, Lower Cave and Hall of the White Giant).

Details of other areas of the park, including hiking trails and backcountry caves.