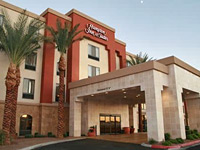 Hilton hotel in a developing commercial area near the south edge of Henderson, 7 miles from Petroglyph Canyon. Free hot breakfast and an outdoor pool

All hotels in Henderson - Affiliate disclosure
The BLM-administered Sloan Canyon National Conservation Area contains most of the McCullough Range, a series of desert hills on the south side of Las Vegas, formed of dark-colored volcanic rocks, split by dry, rocky ravines and surrounded by open plains. The place is named after the tiny settlement of Sloan, a few miles west of the mountains on the far side of Interstate 15; Sloan Canyon seems not to be a specific location, and instead the most famous ravine within the NCA is Petroglyph Canyon, a typically arid drainage that lies along an ancient north-south travel route, as evidenced by many hundreds of petroglyphs, etched into the dark patina of the boulders along one section of the wash, extending for over 500 feet. Many of the designs are still crisp and well-defined, despite centuries of ageing in the desert sun; they show a great variety of designs, and are collectively regarded as one of the most important archaeological sites in the state.

The majority of visitors to the NCA see only the petroglyphs, starting at a recently-enhanced trailhead on the south side of Henderson, staffed all day at cooler times a year and Friday to Sunday in the summer, but elsewhere in the 48,438 acre preserve are a network of paths starting from six other trailheads, some encountering less well-known petroglyph sites, and also large areas of empty land, open to cross-country exploration. About half of the preserve incorporates the North McCullough Wilderness Area, which includes Petroglyph Canyon.

The McCulloch Mountains are visible across much of Las Vegas though are not reached any major routes, instead by various residential streets on the fringes of Henderson including Nawghaw Poa Road to the Petroglyph Canyon trailhead, Shadow Canyon Drive for the Black Mountain Trail and McCullough Hills Parkway for the Anthem East trailhead, from where an 8 mile path crosses the northern section of the mountains to another access point along Mission Drive. Most paths climb to the high country, following canyons and ridges, to overlooks and peaks, and apart from Petroglyph Canyon, all are lightly used, especially in summer. The southern reaches of the NCA are the most remote, and devoid of trails. The highest point is 5,092 foot Black Mountain, while the desert lowlands are generally below 3,000 feet.

The Sloan Canyon region was designated an NCA in 2002, principally because of the rock art and other ancient relics, but also because of the interesting geology - features include ash deposits, lava flows and glassy metamorphosed rocks, and for the wildlife, particularly for the desert tortoise and bighorn sheep, both relatively abundant across the mountains and plains. The importance of Petroglyph Canyon was recognized earlier, in 1978, by inclusion in the National Register of Historic Places. The rock art ranges in age from prehistoric times, 3000 BC or older, up to pioneer settlers of the 19th century, though most is around 1000 years old. The land is somewhat threatened by the expanding Henderson suburbs, now encroaching into the foothills right up to the NCA boundary, and also by proposed developments to the west, between the mountains and the interstate, and to the south around the currently uninhabited Hidden Valley, location of the south end of the trail through Petroglyph Canyon.