Deep, shady ravine through the Spring Mountains, containing seasonal pools and cascades; the lower end may be reached by a fairly level trail alongside the bushy streambed. A short continuation path leads to a rocky section of the drainage, which can be followed further, by climbing over boulders and other obstacles

Difficulty: Easy to the streambed; moderate to strenuous beyond

Pine Creek Canyon is one of five major drainages along the eastern face of the Spring Mountains in Red Rock Canyon National Conservation Area that may be reached by a maintained trail, though like all the others, the path only goes a short distance into the lower end, until the ravine narrows and gains height via falls and boulders.

More can be seen by scrambling up the streambed - for Pine Creek, at least another mile is accessible since there are no unclimbable falls, yet the majority of people just stay on the official trail, a 2.5 mile partial loop, across the relatively flat land beneath the mountains. The path heads west, coming gradually close to the drainage, descends to the creek then moves back east through overgrown surroundings and rejoins the initial route.

Pine Creek is one of the most popular canyons in the park since the path begins along the busy scenic loop road, the hike is easy, and the vegetation is quite varied; there is also the option of a short side route (the 0.3 mile Fire Ecology Trail) that loops across a controlled burn area, now fully recovered. One other point of interest is the ruins of an old homestead, established here by Horace Wilson in the 1920s.

The main path gives fine views of the mountains and the steep slopes enclosing the canyon, and encounters many different wildflower species, but the scenery is more dramatic further up the ravine, especially after rainfall, when the creek is flowing strongly, through pools and little waterfalls. Wet conditions also enhance the colors and textures of the rocks, which occur in the shades of red, purple and yellow, often with intricate stripy or mottled patterns. The canyon is named for the ponderosa pines that grow at the lower end and further upstream, surviving in this generally hot, desert environment owing to the locally moist, shady conditions.

The trail starts from a parking lot near the south end of the one-way scenic drive, a location also acting as an overlook, since it has a slightly elevated position, allowing a panorama across more than 15 miles of the mountains. This location is a ten mile drive from the visitor center.

Rocks by a pool

The path descends quite steeply for a short distance while heading south along a tributary ravine, then bends west and thereafter stays fairly level. The bushy, sandy ground at either side is home to yucca, several types of cacti and many spring wildflowers, the majority quite small. The two intersections with the Fire Ecology Trail are passed quite soon, then after 0.8 miles the path reaches another junction, at the start of the 0.9 mile loop section, just after the concrete foundations from the Wilson homestead. The south side of the loop (left fork) runs mostly right alongside the creek bed, while the north side (straight on) remains a short distance away from the creek until it nears the edge of the cliffs enclosing the canyon, then moves down to the streamway, where it bends back east, through undergrowth, and returns to the junction.

A line of stones at the far side of the loop, north of the creek, indicates an unofficial, 0.3 mile continuation path; through bushes and down to the streambed of the north fork of the canyon, up the far side and through more dense undergrowth to the main drainage, the south fork. Cairns mark a possible course up the canyon, round many big boulders and over small ledges, though often there are several choices as to the best route. The boulders become gradually larger, and the streambed steeper, until another fork in the canyon, about half a mile from the loop trail. Wet weather results in many pools, the deepest 3 feet, linked by cascades and channels of fast flowing water, and even during dry conditions, the canyon stays cool and moist owing to the high walls and thick vegetation. Riparian plants include streambank springbeauty and seep monkeyflower. Above the junction, either branch of the ravine can be followed further with somewhat more difficulty, for another mile or more. 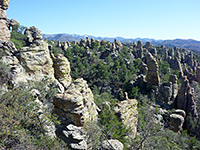 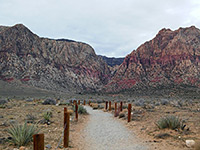 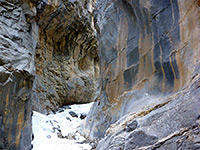 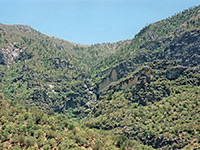 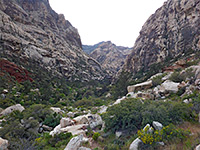