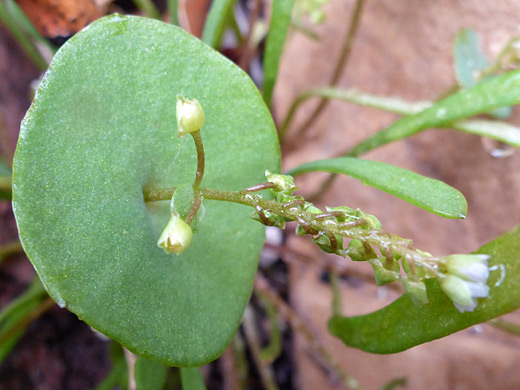 Basal leaves of claytonia parviflora are differently-shaped to those on the stems, and plants are variable across the geographic range; four subspecies have been identified. Ssp viridis, of the Mojave Desert and other parts of south California, has stem leaves which are linear (usually), or divided into two ovate leaflets, and linear basal leaves. Ssp utahensis has spatulate basal leaves and perfoliate stem leaves; the stem passes through the center of the leaf. This variety occurs across much of Nevada, south California, and small parts of Utah and Arizona. The other two subspecies usually have linear or string-like basal leaves and perfoliate stem leaves; these are the widespread ssp parviflora, and the less common ssp grandiflora of the Sierra Nevada foothills, which produces larger flowers than the other three; up to half an inch in diameter compared with less than a quarter of an inch.

For all subspecies, the inflorescence is a elongated, bracted cluster of tiny flowers, which have pale green sepals and white or pale pink petals. 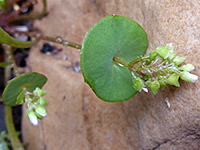 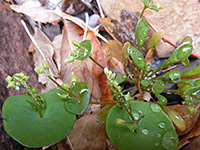