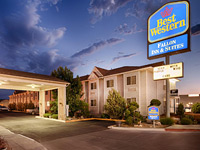 Well-reviewed hotel five blocks from the US 95 junction, in a commercial area of Fallon with several restaurants, shops and casinos

All hotels in Fallon - Affiliate disclosure
The Carson River originates as two forks in the Sierra Nevada southwest of Lake Tahoe, and flows northeastwards for 130 miles before its waters disperse and evaporate in the Carson Sink near Fallon, a usually dry lake bed 30 miles across. About two thirds of the way along the river is in impounded to form a large, relatively shallow reservoir with 69 miles of shoreline when full, formed in 1915 after construction of Lahontan Dam, an earthen structure, at the time the largest dam of this type in the country. The lake is surrounded by sandy, uninhabited, high desert land, with low relief, mainly sagebrush-covered flats and little hills, split by a few tributary washes.

Lahontan Reservoir was created supply water for irrigating the surrounding farmland, while the dam also provides hydroelectric power, together one of many such projects resulting from the 1902 Reclamation Act. The reservoir is named after ancient Lake Lahontan, which covered nearly 9,000 square miles of northwestern Nevada, extending into California and Oregon, reaching a maximum area around 13,000 years ago then largely disappeared 4,000 years later, the only significant remnants being Pyramid Lake and Walker Lake.

The reservoir and the surrounding land became a state recreation area in 1971, popular mainly for water-based activities, principally boating, fishing, swimming and water skiing, plus camping, horse-riding and birdwatching. The shoreline is not particularly scenic, lacking any photogenic rock formations or large peaks, and without any extended hiking trails, though around half the shore is accessible, via roads or tracks. A riparian corridor connects the upstream (southern) end of the reservoir with another Nevada state parks property, Fort Churchill.

US 95A crosses the Carson River upstream of the reservoir and runs close to the southern portion of the SRA, while US 50 gives access to the northern section. The small settlement of Silver Springs, at the highway intersection, has some facilities, with a better selection in Fallon, 25 miles east. The most visited part of the state recreation area is at the north end, around Lahontan Dam, where a paved and gravel road follows the shore for nearly 4 miles to a promontory, Horsemans Point - along here are several short tracks to the waters edge, some of which is lined with native cottonwood and willow trees. The adjacent land is flat and rather featureless though further south the shore becomes rockier and more undulating, at the edge of the Dead Camel Mountains, reachable in a few places by rougher tracks, then beyond is a large, low-lying basin, subject to seasonal flooding. Other short tracks lead to several places along the west shore near the dam, off US 50, while further south, the main access to this side of the reservoir is via Fir Avenue off US 95, to the park headquarters, a developed campground, overlooks and many primitive camp locations. Boat launching and camping are permitted at any suitable location, away from the day use areas. Hunting is also allowed in most locations in the park.