Beginning at Lily Lake along Hwy 7 south of Estes Park, this trail crosses the upper end of a valley, ascends through forested land to Storm Pass then climbs further to the top of a conical summit

Difficulty: Moderate; steep at the end

Type: One way. Also accessible by a trail from Bear Lake

At 11,006 feet, the conical summit of Estes Cone is still a little way below the treeline, though the uppermost part is formed of exposed, jagged, lichen-covered rocks that do rise above the surrounding bushes and stunted pines, giving a 360 degree view over the eastern edge of Rocky Mountain National Park, including Longs Peak to the south, the Twin Sisters to the east and the valley of Glacier Creek to the northwest. The Estes Cone Trail is only 0.7 miles in length, but forks off the longer Storm Pass Trail which runs across the southern slopes of the peak, reaching a high point of 10,250 feet at the nearby pass. This route starts in the west at Sprague Lake, 4.1 miles away, but an easier approach is from the east (2.7 miles) starting at Lily Lake on Hwy 9.

Although the summit affords a grand panorama, most of the path to this point is through thickly wooded terrain where the views are quite restricted, but the hike is a good way to spend half a day; not too difficult and lightly used, despite the eastern trailhead being just 6 miles from Estes Park, away from the busier central section of the national park and not subject to any entry fee.

Designated parking for the east end of the Storm Pass Trail is along Hwy 9 at Lily Lake, but this often fills up early, being also used by picnickers and people walking the level, half mile loop trail around the lakeshore. There is more parking available directly opposite, at the start of the short side road to the Twin Sisters trailhead, or along highway verges, or alongside another track (Fish Creek Road) that leads north towards some stables.

Lily Lake is mostly surrounded by tall, moist grasses, mixed with small patches of woodland and many wildflower species. The land all around is relatively flat, except to the north, as here the ground slopes up to Lily Mountain, a low, wooded peak. The Storm Pass Trail starts by following an old vehicle track southwards, away from the lake and into drier grassland, where the path veers off to the west, away from the noisy road and into woodland, which is light and open, since the trees have recently been thinned and the undergrowth cleared. It crests a little hill and descends the side of a deep valley - the upper end of Aspen Brook, dropping down to the stream, where two paths branch off at either side, both used by horse riders, and both leading towards private land. The main route heads northwest up the far side of the valley, crossing two little tributary streams then, after a brief narrow, rocky section, turns back south, becoming a bit steeper.

Fractured, lichen-covered rocks at the summit of Estes Cone

The surroundings are thick forest and there is not much to see apart from a few layered, rocky outcrops right beside the trail. There follows a steady climb of nearly 2 miles through woods that thin out in a few places giving eastwards views, but mostly stay tall and thick. The route is fairly straight, curving only gently round the steep slopes on the south side of Estes Cone; small bends reveal only the next long stretch. Eventually the path levels out and descends gently through an aspen grove to Storm Pass, this just a clearing in the woods, also lacking any long distance views. The Estes Cone Trail forks off north, the Storm Pass Trail continues west, descending towards the Wind River and then Glacier Creek, while a connecting trail branches southeast to Eugenia Mine and the Longs Peak trailhead.

Gap in the trees

The terrain along the Estes Cone Trail is gentle initially but soon steepens appreciably. The path has a few switchbacks then is mostly straight, as the surface becomes an uneven mix of rounded, reddish boulders and course granitic sand. The route is well marked by cairns. It takes about half an hour to climb the 0.7 miles (750 feet) from the pass to the summit, where the trees fade away somewhat. There is no single distinct high point, rather a elongated ridge extending about 300 feet. A faint path heads towards a viewpoint on the south end, running beside a line of weathered cliffs of blocky granite. 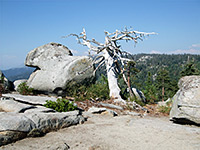 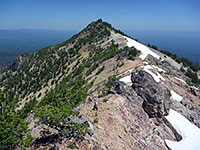 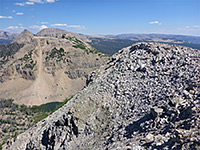