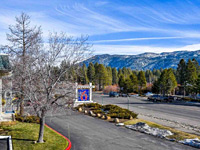 Affordable motel in a residential part of South Lake Tahoe, adjoining a small belt of woodland along the Truckee River. Close to shops and restaurants

All hotels in South Lake Tahoe - Affiliate disclosure
Lake Tahoe is strikingly beautiful when seen from afar, but those seeking peace and solitude will not be immediately impressed with much of the area around the shore as it contains innumerable shops, marinas, campsites, and especially holiday homes and lodges. Thousands of these wooden dwellings are scattered through the dense pine and cedar forest around the lake, and many of the adjacent beaches are privately owned. Still, there are plenty of publicly accessible, secluded places close to the waters edge and vast unspoilt wilderness away from the lake, especially to the north and west - Lake Tahoe is surrounded on most sides by high granite mountains with peaks well above the treeline, some covered by patches of snow that persist all year. The mountains are a very popular skiing destination during winter, with 14 ski centers that start to open in late October and some continue until May.

Tahoe is the largest lake in California, and is notable for being particularly deep, cold, and clear, and for having dramatic Alpine surroundings. It lies across the California/Nevada border, and the most spectacular approach is from Carson City on the Nevada side, via US 50 which climbs up a steep winding valley to 7,300 feet. After 10 miles, the road reaches a small, tree-lined lake at Spooner Junction, where US 50 turns south and NV 28 joins from the north. The two other main entry routes are from the north along CA 267 from Truckee on I-80, or from the south via US 50 from Sacramento - see the Lake Tahoe Map.

US 50 and NV 28, plus CA 89 on the west side, form a circular route right round the lake, which for the most part of its 71 mile length is within sight of the shoreline, although not at Spooner Junction; driving north from here, it is a little while before the clear blue waters come into view. Eventually, though, the scenic drive descends to the lakeside through largely undeveloped pine forest, part of Lake Tahoe Nevada State Park - a comparatively little used park that features hiking, primitive camping, picnicking, and various activities along the beaches. After 12 miles the highway arrives at Incline Village and then Crystal Bay, the two main resorts on the north side of the lake. The village marks the start of one of the two most developed areas around Lake Tahoe, and for 12 miles west most of the shoreline is privately owned though still with public access at intervals, sometimes at places that charge for entry such as Kings Beach Recreation Area, a mile from Crystal Bay. Once past the settlement of Carnelian Bay, the rustic lakeside villages become smaller, and separated by patches of undeveloped woodland; a sizeable section of the forested hills west of the highway is contained within Burton Creek State Park, though this has no facilities apart from a few trails. More popular is the Tahoe State Recreation Area near the small town of Tahoe City, which has a campground, beach and picnic area. Just outside town is one of the few through routes to the west side of the lake (CA 89), which follows the fast-flowing Truckee River northwards, and links with the main northerly trans-Sierra highway I-80. The evocative Donner Memorial State Park lies just a few miles west along the interstate.

Beach boardwalk leading to a small pier, at Skyland

The southwest quarter of Lake Tahoe is the least inhabited, bordered by steep, mostly inaccessible mountain slopes, and also the most spectacular, especially around Emerald Bay, where CA 89 winds around a wide, forested inlet with a tiny island in the center, all set beneath towering granite peaks of the Desolation Wilderness.
Affiliate disclosure

This area is the main location for hiking around Lake Tahoe, with a good selection of short and long trails, including the steep but popular Eagle Falls Trail that leads to several pretty glacial lakes, the Glen Alpine Trail to the even more beautiful Lake Aloha, and the 5 mile path to the summit of Mount Tallac. Emerald Bay itself is part of a state park that amongst other attractions has a 38 room reproduction of a Viking castle (Vikingsholm). The forest just to the north is contained within another state park (DL Bliss), which also has great views of Lake Tahoe, plus a pleasant 4 mile path along the shoreline. South of Emerald Bay, the land flattens out and the shore forms a long wide, stretch of golden sand (Baldwin Beach - day use fee $5 per vehicle), hidden from the main road by a band of trees and meadows, so very quiet and peaceful - see panorama. Highway 89 then enters more suburbia around South Lake Tahoe, the largest town on the lake, home to the biggest marina, a good selection of hotels, and one of the main ski centers at Heavenly Valley. Just over the Nevada border, Stateline has several big casinos, and the lakeside remains quite built up for most of the 12 miles back north to Spooner Junction. A complete journey without stops around the ring road takes around 3 hours.

The hills rise steeply around most parts of Lake Tahoe, so there are few side roads into the national forests that comprise much of the surrounding mountains, and hence not many opportunities for free camping. One of the few paved routes is just north of Idlewild, half way along the west shore, on land of the Tahoe National Forest - this follows a small stream, Blackwood Creek, for 2 miles along a forested valley, and does pass a few places suitable for camping. The end of the road is also a popular starting point for trips into the backcountry, with the Pacific Crest Trail six miles further up the valley. Official campsites can be found at intervals around the lake, including at Tahoe Vista, Incline Village, Zephyr Cove, Meeks Bay, South Lake Tahoe, Camp Richardson and Tahoe City.

Hiking - trails around southwest Lake Tahoe, the most scenic part of the adjacent mountains

Eagle Falls Trail
★★★★★
4.5 miles, 1600 feet
Quickest route into the beautiful granite backcountry of the Desolation Wilderness, first passing a waterfall and a secluded lake, then climbing steeply to an elevated plateau, and on to Upper Velma Lake