Relatively easy and popular path that climbs a scenic valley containing over a dozen small lakes, up to Morgan Pass, along a subsidiary ridge east of the Sierra crest. The scenery is sparsely wooded, with meadows, several streams and much exposed granite

Trailhead: Mosquito Flat, at the end of Rock Creek Road

The Little Lakes Valley Trail is the main hiking route starting from the end of Rock Creek Road, one of the seven paved accesses to the Eastern Sierra Nevada, south of Mammoth Lakes. Starting at an already high elevation of 10,230 feet, the 3.7 mile path climbs quite gently alongside the upper reaches of Rock Creek, through sparsely wooded landscapes with meadows and much exposed granite, past or close to nine named lakes, then rises just a little more steeply to 11,120 foot Morgan Pass, along a subsidiary ridge projecting northeastwards off the Sierra crest. The valley is ringed by dramatic peaks on all sides, the steep slopes rising to five major summits over 13,000 feet - Mt Mills, Mt Abbot, Mt Dade, Bear Creek Spire and Mt Morgan, the tallest. The gradual ascent is rather different to many other Eastern Sierra trails, which start lower and climb higher, and so have lengthy steep sections.

All the Little Lakes area, including the approach road, is part of the Inyo National Forest, while the upper end of the valley is within the John Muir Wilderness. The hike is usually accessible well into November, when some or all of the lakes freeze, and are popular locations for ice skaters owing to the easy access, just 11 miles from US 395. For short trips, good intermediate destinations are Long Lake, the largest, after 2.2 miles, and the secluded Gem Lakes after 3.4 miles, though it is well worth walking all the way to the pass, for the best elevated views, and the round trip to here can be done in just 3 to 4 hours.

Snow along the trail to Morgan Pass
From the pass, the path continues down the valley of Morgan Creek, past several more lakes, followed by a big descent to a former tungsten mining area alongside Pine Creek, though part of this is blocked, probably permanently, due to landslides. The one other trail in Little Lakes Valley is a more strenuous route that climbs to Mono Pass, near Mt Starr.

Tracks in the snow

Rock Creek Road leaves US 395 at Toms Place, opposite the road to Crowley Lake, and soon enters the Sierra foothills, ascending steadily past a few campgrounds, a snow park and two lodges, the upper one on the shores of Rock Creek Lake, just beyond which is a parking area with gate, a point where the road may be closed early or late in the season. It continues, narrower but still paved, for 1.2 miles to a larger parking place at Mosquito Flat, site of another (tent-only) campsite, set in shady pine woodland right beside the creek.

The Little Lakes Valley Trail starts on the west side of Rock Creek, following the stream southwards through sparse woodland, soon passing a sign at the boundary of the John Muir Wilderness then not far after the junction with the less-used path to Mono Pass, climbing 1,600 feet in 3 miles. The junction is close to but just out-of-sight of Mack Lake perhaps the most spectacular in the valley, especially when seen from an overlook atop cliffs, reached by a short spur trail - the southwards view encompasses the lake, granite outcrops to one side and all of the valley beyond, encircled by the high peaks.

The main path rises over a brow, also giving good views of the valley ahead, and stays almost level for a while, coming close to the shallow Marsh Lake and over a couple of small streams feeding pretty Heart Lake, flowing through wet meadows. The route follows the shoreline of Heart Lake into a thicker patch of trees alongside one of the two entry streams, towards Box Lake, coming close only at its southern end. Other pools, the Hidden Lakes, can be seen by off-trail hiking to the east.

Ice on Long Lake; Mt Dade and Mt Abbot in the distance

More easy climbing, crossing a stream at one point, reaches Long Lake, also very photogenic, with craggy slopes above and granite outcrops along the shoreline. The path runs beneath low cliffs for a while then comes out to flatter land on the south side of the lake, followed by a longer ascent through pine woods, past two junctions with the 0.6 mile trail to Chickenfoot Lake, hidden beyond a low ridge to the east.

One of the Gem Lakes

The trees become sparse as the trail rises some more to a flat area at the junction of two streams, where a spur goes southwards to the Gem Lakes - three of them, plus several ponds; the largest and most scenic is the furthest, directly below a sheer granite cliff. The other path makes a short, steeper climb, via two switchbacks, to Morgan Pass, bordered by a slope of bare, jagged boulders to the north and a partly vegetated hillside to the south. Another four lakes lie ahead, over 1.7 miles, before the trail starts to descend more steeply and reaches the first of several sections where the route is impassable due to rockslides.

The view west from Morgan Pass 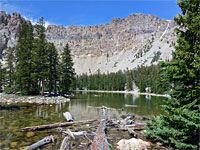 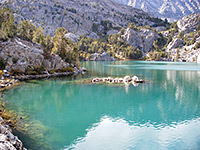 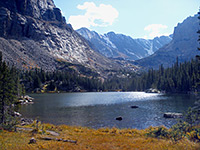 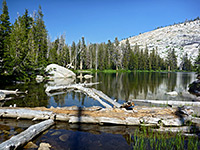