Highlights:
Spectacular arrays of stone columns and other eroded rock formations, lining the eastern shoreline of Crowley Lake in Owens Valley, set against the backdrop of the Sierra Nevada. Reached by a drive or walk across sagebrush plains, along a track off US 395
Nearest town with hotels:
Bishop, 28 miles
Management:
Mono County
Location:
37.590, -118.704 (2WD trailhead)
Seasons:
All year, though the access road is affected by snow in the winter
Rating (1-5):
★★★★★ 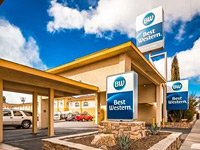 Along the main road through Bishop (US 395), just opposite the main supermarket/shopping area in town, adjacent to several restaurants

Hotels in Bishop - Affiliate disclosure
Crowley Lake, towards the north end of Owens Valley in eastern California, was formed in 1941 after construction of Long Valley Dam across the Owens River, and is named after Father John Crowley (1891-1940), the 'Desert Padre', a leading figure in the settlement and development of this high desert region. Water from the reservoir is transported by aqueduct to Los Angeles, though the river does still flow downstream, initially through a deep ravine, the Owens River Gorge, popular with rock climbers.

In contrast, the surroundings of the lake are mostly unremarkable - low, sagebrush-covered hills of volcanic tuff, entirely treeless, crossed by just a few dirt tracks, yet along some parts of the shoreline, especially a two mile section on the east side, the water has eroded into the adjacent slopes to reveal a previously hidden and unknown series of columns, pinnacles and other unexpected formations, now forming a line of low cliffs just above the waterline.

The biggest of the columns are about 15 feet tall; all are round or polygonal in cross-section, parallel to each other, nearly or exactly vertically oriented, and evenly spaced - all very unusual, a unique formation in the Southwest. As always in Owens Valley, the immediate surroundings are made more dramatic by the ever-present Sierra Nevada, rising over 6,000 feet above the valley floor just a few miles west.

Pebble spit, forming a reflective pool; Mt Morgan in the distance
For most people, a visit to the columns involves a walk of 1.9 miles along tracks, though drivers of 4WD vehicles can park right beside them, close to the most famous location, approximately in the middle of the line of formations, from where it is easy to walk north and south along the shoreline to other locations, or at least this is the case most of the year when water levels are some distance below the edge of the cliffs. On occasions though, the lake surface can be much higher, resulting in most of the formations being inaccessible. The location seems relatively popular despite its remote setting; both the 2WD and 4WD accesses.

Several locations along the shore of Lake Crowley are signposted from the highway (US 395), but not the columns. The approach is straightforward though, along an unbranched, paved road that leaves to the north at Toms Place, opposite Rock Creek Road, one of the major access routes to the Eastern Sierra. The columns route, Owens Gorge Road, takes a circuitous course through a pine tree-lined residential area (Sunny Slopes), climbs a little then straightens out, crossing gradually more open terrain before descending towards the Owens River and crossing along the top of the dam. The pavement ends 900 feet further after which the main track heads northeast, while another, slightly narrower, forks off west at a sharp angle, rising to flatter land, past a short spur to a parking/camping place; this is the 2WD trailhead. The track continues into a little ravine and up a rough, steep spot on the far side, necessitating 4WD; after here, all the way to the lakeshore parking, the surface is smooth and would be fine for all vehicles. The route is north, in and out of a minor valley, right at a junction (0.35 miles), then left and immediately right (0.9 miles), and finally straight on at a four way junction (1.4 miles) to the parking place, about 150 feet above the lake, from where a short, steep path descends to the bay, the north side of which is lined by the largest columns, the location most often photographed. The track to the right at the last intersection crosses more sagebrush for another 1.5 miles before ending at an alternative lakeshore access point, at the north end of the columns. Both trailheads, and other places along the tracks, have great views over the lake, and across the mountains; excellent places to camp.

The columns on the north side of the bay are the biggest, and have the greatest spacing between them, and behind. To the north are several smaller arrays, almost as photogenic, mostly near-white, the predominant hue of all of the cliffs, but orange to brown in some places. A few areas have cliffs with smooth faces and pinnacles above. The cliffs are low, up to 15 feet or so, and it is possible to climb up in some places. South of the entrance bay are higher, more extensive cliffs eroded into more varied formations, including caves, arches and knobbly, small-scale protrusions in addition to the columns, plus big boulders on the beach, and other shapely rocks on the rim above, all with rather more orange-brown coloration. At least 1.2 miles of the southwards shore is accessible, and interesting. The beach itself is fairly uniformly covered with pebbles or columnar fragments, often still regular in cross-section, and it slopes only very gently to the edge of the shallow water.

Yellowish cliff, slightly undercut towards the base

The columns began to be exposed shortly after filling of the reservoir in 1941, but not until 2015 was their origin satisfactorily explained. Around 760,000 years ago this area was covered by ash and pumice following the major eruption which created the Long Valley Caldera. Shortly afterwards, a small part of the debris was inundated with cold snowmelt water, which seeped down to the still-hot lower layers of the ash, and was heated to boiling, causing steam to circulate and then rise, evenly. The vertical pathways of the rising steam caused hardening and chemical changes to the ash, so when all was compressed over the millenia to form tuff, the columns were left embedded amongst softer rocks, which were eroded away by the waves of the lake.

Short line of columns, angled away from vertical

37 views of the Crowley Lake Columns