Highlights:
Rocky peninsula bordering San Diego Bay, lined by cliffs and tidepools, and site of a historic lighthouse. Two trails, one to the pools, the other to an overlook of San Diego. The monument commemorates Juan Cabrillo, the first European to explore the western US coastline
Nearest city with hotels:
San Diego (Bayside area), 5 miles
Management:
NPS
Location:
32.674, -117.241
Seasons:
All year. Whale watching is best around mid winter and late summer. Opening hours are 9 am to 5 pm
Rating (1-5):
★★★★★
Weather: 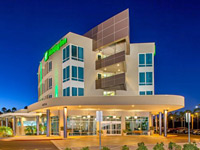 One of the closest hotels to Cabrillo National Monument, 5 miles north along Hwy 209. Includes an onsite restaurant, outdoor pool and putting green

All hotels in San Diego (Bayside) - Affiliate disclosure
Great views of the Pacific Ocean and San Diego Bay, wildflower-covered hillsides, whale watching, an historic lighthouse and tidepools along a rocky coastline are the attractions of Cabrillo National Monument, which covers a small area of less than one square mile near the southern end of Point Loma, a narrow spur of land over 400 feet in elevation, jutting out into the Pacific Ocean. The monument is relatively little known compared to the large national parks of California but its city location ensures a steady stream of visitors all year.

The site was first protected in 1932 as a California Historical Landmark, and upgraded to a national monument in 1949. In addition to the overlooks, historic features and short paths on top of the peninsula are two longer trails, one to a series of tidepools and eroded cliffs on the ocean side of the peninsula, the other through coastal scrub to an overlook of San Diego.

The national monument is reached by Catalina Boulevard through Point Loma, and then Cabrillo Memorial Drive, leading to a large parking lot in front of the visitor center. A short side road descends to the rocky shoreline to the west. The park is open from 9 am to 5 pm, every day of the year, and the entrance fee (2022) is $20 per vehicle.

The monument commemorates and is named after Juan Rodriguez Cabrillo, the first European to explore the western coast of the USA - sailing north from Mexico, Juan entered what is now San Diego Bay in September 1542, and rested there for a while before the expedition proceeded up the California coast, possibly as far as Oregon. The small part of the Point Loma peninsula occupied by the Cabrillo National Monument is 9 miles from San Diego city center via CA 209 and is bordered by a US Naval Reservation to the north (which contains the Fort Rosencrantz National Cemetery), and a Coast Guard Reservation to the south; the peninsula has been occupied by the military since 1852 owing to its strategically important position. The centerpiece is the whitewashed building housing the Old Point Loma Lighthouse, built in 1855 but in service for only 36 years since its light was too often obscured by fog; a new station was built nearer sea level and proved to be more effective. The interior has been preserved with all original fixtures and fittings dating from the late nineteenth century, while other exhibits can be seen in an adjacent museum, in what was once the assistant keeper's house.

The peninsula is a sedimentary outcrop rising to 422 feet above sea level. Most rocks are from the Cabrillo Formation, sandstone and conglomerate, while the lower slopes are from the Bay Point Formation, in turn overlying the Point Loma Formation, sandstone and shale, in which are found the tidepools along the western shoreline. Meadows, bushes and trees cover the flat land on top, and the steep hillsides, which are enlivened by many species of wildflowers in spring and summer. Three unusual desert plants, found in very few other places in the country, are coastal agave, San Diego barrel cactus and golden cereus. Short paths link the visitor center, the old lighthouse, a statue of Juan Cabrillo (installed in 1988, replacing an earlier version that had become weathered) and several viewpoints, while the longer (2 mile) Bayside Trail descends through the shrubbery on the bay side, ending at an overlook, although this seems not to be very popular. Around the center are various displays relating to the natural history of San Diego Bay and the military hardware located at the US Naval Air Station clearly visible just across the waters on North Island; beyond here are the skyscrapers of downtown San Diego and the mountains in the Cleveland National Forest looming in the distance. Another path, south of the lighthouse, goes to Whale Overlook, a good place to look for cetaceans in the ocean below; along the way are a whale sculpture, and a replica whale backbone.

On all sides of the Cabrillo peninsula the hills drop down to rocky cliffs with exposed, angled strata, and sandy bluffs eroded by wind and rain into unusual, small-scale formations. The coast on the west side is accessible by road, from where a footpath, the Point Loma Tidepools Trail, runs just above the sea, passing several places to climb down to the pools, wave-cut terraces, mini caves and pebble beaches along the water's edge. This part of the Pacific lies in the migration path of grey whales, who journey to Baja California and the Arctic Ocean around October and return during January-February. The sea on the east side of the peninsula is not accessible. 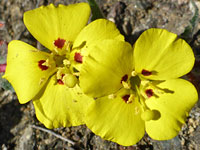