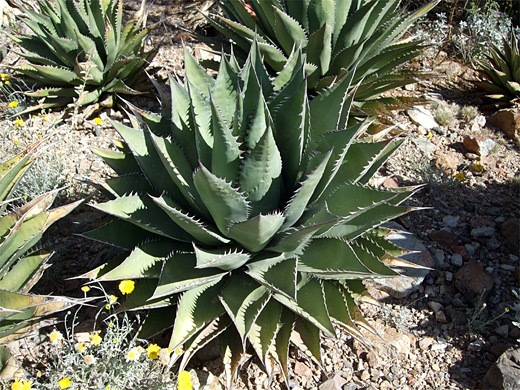 Once found quite extensively in far south California, agave shawii is now a rare species that grows in just a few scattered locations, some the result of recent repopulation. Border Field State Park and Cabrillo National Monument are two places where the agave may be viewed, but it remains common over the border in Baja California, along the Pacific Coast.

The plant resembles agave parryi of the Sonoran and Chihuahuan deserts in that its greyish-green leaves are oval-shaped rather than long and dagger-like, and relatively flat; the axial ends of the upper sides of the leaves are slightly concave, while the undersides are gently convex. The white teeth along leaf edges are closely spaced, separated by less than half a inch, while the terminal spine is brown or grey in color, an inch or more long. Typical leaf dimensions are 4 by 15 inches. 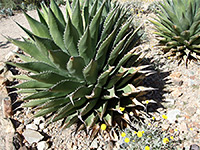