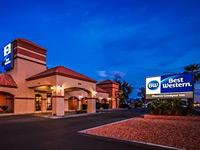 Centered on a beautiful courtyard garden with patios, palm trees and pool; amenities include a fitness center, games room and a restaurant/bar

All hotels in Goodyear - Affiliate disclosure
The Estrella Mountains, Sierra Estrella, are a relatively narrow range extending 23 miles northwest to southeast, on the southwest side of Phoenix, rising to a high point of 4,232 feet and bordered by the Gila River valley on one side and a vast desert plain on the other. The northernmost portion is contained within Estrella Mountain Regional Park, occupying a rectangle of land 5.5 by 6.5 miles in extent, crossed by a network of trails totaling over 30 miles, popular for hiking, cycling and horseriding. In winter and in the monsoon season the river floods, creating wetland areas along the park's northern edge.

The mountains were once inhabited by the Hohokam people, from 500 to 1500 AD, though there do not appear to be any visible relics from this period. The vegetation in and around the hills is typical of the Sonoran Desert including plenty of saguaro, though most in the park are quite well separated. The majority of the trails cross flat land and the northern foothills, climbing just a few hundred feet; the main spine of the mountains, occupying the southeastern half of the park, is essentially trailless, and rises over 1,500 feet. The intersecting loops allow for many possible loop hikes, from less than one mile to over 15 miles.

The park was the earliest established of the Maricopa County regional preserves, in 1954, and it has a good range of facilities including a campground, a large grassy picnic area, a horse staging arena and a nature center. Entry (2022) is $7 per vehicle.

The main entrance to the park is along Vineyard Avenue, 5 miles south of Interstate 10 and 3 miles from Phoenix-Goodyear Airport. The surroundings are quiet and rural; the park is bordered just to the north by the Gila River, beyond which is a strip of farm fields. A limited amount of development adjoins its northern edge including the golf course, just within the park, and a few estates, but the remainder is quite unspoilt. To the east, Vineyard Avenue curls southwards, now 143rd Avenue, and passes several other entrances but these are usually closed by gates. The access route passes the fee station and the nature center then splits into a loop, with two short spurs - along here are several trailheads, the horse area, the picnic place and the campground. 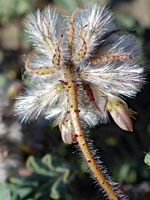 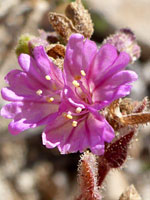 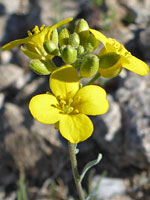 
More wildflowers in the park

The shortest trails start from three trailheads (Quail, Baseline, Gila) below the north edge of mountains; paths of the same name climb just a little way up the slopes and are linked by the Saddle and Baseline trails. Quail, Horseshoe and two parts of the Baseline loop continue further south and join with the north end of the Rainbow Valley Trail that connects to another trailhead, beside the horse staging area. Longer, less travelled paths head south from here - Toothaker, Coldwater and Butterfield, and these in turn lead to the Pedersen, Gadsden, Homestead and Desert Rose paths that explore the remoter areas to the east and south. In the northeast corner are two circuits intended for mountain bikes, the Technical Loop and the Long Loop. A representative medium-length round trip hike (6 miles), along the Toothaker and Rainbow Valley trails is described below.

The Toothaker Trail heads southwest from the west side of the horse staging area, traversing level land crossed by a few little washes, then over a minor brow and on to a bigger flat, with high mountains ahead. It passes a crossroads junction, with the Dysart Trail, a connecting route west to the Rainbow Valley Trail and east to the Coldwater and Butterfield trails, followed by a bigger wash, after which the path begins a gentle climb, soon running alongside the streamway to another junction, at the south end of the Rainbow Valley Trail. This rises some more, into nicer, rockier scenery; the surroundings were somewhat nondescript before. It crosses a pass, as lands to the west come into view for the first time, then descends to a wide, flat area centered on a dry streambed, the same drainage encountered previously. A few photogenic dead saguaro line the path, mixed with live specimens, plus many palo verde trees. The Dysart junction is just before the wash. On the far side of the flat, the trail skirts the edge of the hills, staying nearly level, with broad views north and later east. The cacti become quite sparse though wildflowers are little more numerous. The path rounds the edge of a broad basin, with the golf course visible beyond, and passes a fourth junction, with the Maricopa (Quail) Trail, then ascends to another saddle, and finally drops down the far side, back to the trailhead.