Overlooks
Ten viewpoints along the rim drives, beside the road or along short trails. Seven on the South Rim, three on the North Rim
Featured Hotel 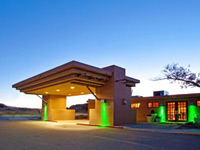 Full service hotel in Chinle, less than one mile west of the national monument at at Garcia Trading Post, and within walking distance of all facilities in town

All hotels in Chinle - Affiliate disclosure
Beyond the Mogollon Rim and the Painted Desert, much of the Colorado Plateau in far northeast Arizona is barren and not particularly scenic, since the land forms wide, empty valleys interspersed by low, scrub-covered mesas, lacking any great natural features. Three of the mesas, named the First, Second and Third, lie at the center of Hopi Indian territory but most of the northeast is Navajo land, including Chinle which is the largest town in the area and the gateway to Canyon de Chelly National Monument.

The comparatively little-known canyon is perhaps not as immediately spectacular as others in Arizona or Utah but it does have sheer sandstone walls rising up to 1,000 feet, several scenic overlooks and many well-preserved Ancestral Puebloan (Anasazi) ruins, mostly in alcoves below the cliffs, and the area provides a fascinating insight into the present day life of the Navajo, who still inhabit and cultivate the valley floor. The preserve also contains the equally large tributary of Canyon del Muerto together with several shorter drainages, with terrain ranging in elevation from 5,540 feet near Chinle to over 7,000 feet around the upper (east) ends of the canyons.

Just east of town, the muddy, seasonal Chinle Wash emerges from the lower end of Canyon de Chelly, between walls that are only a few feet high but rise sharply after a short distance, hence restricting vehicles to a single entrance, next to the stream. A sandy track leads alongside the wash to the scattered settlements and ancient ruins, but all visiting vehicles must be accompanied by a Navajo guide, and foot travel is similarly restricted. The canyon floor remains green and fertile all year round; this, together with the protection offered by the rocky walls and the beauty of the landscape explain why the valley has been inhabited for so long - from primitive peoples 2,000 years ago, through the Anasazi civilization of the twelfth century which occupied a large area of the Southwest before suddenly disappearing, to the Navajo who have lived here for the last 300 years. They rear sheep and goats in the canyon, and plant crops; around 40 families have a permanent home here.

The Canyon de Chelly drainage system comprises four main gorges (Canyon del Muerto, Black Rock Canyon, Canyon de Chelly and Monument Canyon - see map), plus dozens of side ravines, branching eastwards from Chinle into the Defiance Plateau. Most of it may be reached only at rim level via rough, unpaved tracks - just the north edge of Canyon del Muerto and the south edge of Canyon de Chelly are accessible from paved roads. The North Rim Drive (Indian Reservation 64) links Chinle with the north-south route IR 12 and passes several overlooks, while the South Rim Drive, although not a through road, offers more dramatic vistas, ending at the most spectacular viewpoint of all, the overlook of Spider Rocks, which are twin 800 foot towers of de Chelly sandstone isolated from the canyon walls. The rocks are a site of special significance for the Navajo, as according to legend, the Spider Woman lives on top and keeps the bones of her victims there. Beyond the rocks, the main canyon continues unseen for many miles.

Canyon de Chelly Overlooks - descriptions and photographs of 19 overlooks along the canyon edge.

Canyon de Chelly National Monument is administered as part of the National Park Service but since it lies on Navajo land, admission is free. However, unsupervised access is restricted to the rim overlooks and to a single trail into the canyon, leading to the White House Ruins, as for all other trips down or along the canyon, a Navajo escort is required. The ruins date from about 1200 and are some of the oldest in the canyon. The trailhead is located seven miles along the South Rim Drive; the 1.2 mile White House Ruin Trail is rocky and steep in places but well-maintained and not too difficult - it takes between 25 and 50 minutes to get down, depending on fitness, though despite the pleasures of walking, many visitors prefer to take the Navajo jeep tours, which visit various other locations along the canyon, last for all or half of a day, and cost in the range $100 to $250. Guides and backcountry permits are needed if hiking any other trail in the national monument - South Rim routes include the short path into the canyon at Tunnel Overlook (the westernmost viewpoint), and the Zuni Trail and White Sands Trail near Sliding Rock Overlook. There are several remote paths along Middle Mesa, between the two main canyons, while more accessible paths on the North Rim include Bare Rock Trail to the base of Little Navajo Fortress, Antelope Trail near Antelope House Ruins, Many Skulls Trail near Big Cave Ruins and Hanging Ladder Trail in the vicinity of Mummy Cave.

The national monument has a well-stocked visitor center, near which is an excellent campsite (Cottonwood Campground) with basic facilities - though no showers - and plenty of sites, nestled beneath large cottonwood trees. For many years there was no charge to stay here, but fees have been collected since April 2012. Like Chinle itself, the site is visited by quite a few stray dogs, but they tend to be friendly and well-behaved. Another option is Spider Rock Campground, a privately-managed operation along the South Rim Drive but just outside the monument boundaries.

White House Ruin Trail
★★★★★
1.2 miles, 560 feet
The only path open to unaccompanied hikers; descends to a famous ruin at the base of the cliffs on the north side of the canyon (currently closed)