Highlights:
Swirling, patterned sandstone in a great variety of colors, eroded into cliffs, buttes and ravines; across the southern slopes of the Pine Valley Mountains. Explored by a 1.3 mile path then off-trail hiking
Nearest town with hotels:
Hurricane, 23 miles
Management:
USFS and BLM
Location:
37.234, -113.477 (trailhead)
Seasons:
Spring, summer, fall - the access road is affected by snow in winter
Rating (1-5):
★★★★★
Weather:

Many visitors to St George in southwest Utah head off eastwards to Zion National Park (40 mies), but closer, to the north, are a range of similar red and white rock landscapes, only slightly less spectacular. They are found across the southern slopes of the Pine Valley Mountains, where sandstone layers at the edge of the Colorado Plateau have been pushed up by the underlying volcanic rocks, and eroded into the familiar domes, cliffs and canyons. Interesting sites include Red Cliffs Recreation Area centered on the permanent stream of Quail Creek, Buckskin Hollow and the surrounding, partly volcanic scenery of Red Cliffs NCA, and several short slot canyons including Yankee Doodle Hollow.

Peak
Another location, not widely known, is the Yant Flat Cliffs, a stretch of red and orange rocks right at the upper edge of the sandstone layer, extending about three miles along the southern boundary of a rocky plateau (Yant Flat). Above here the mountain slopes are wooded and overgrown, but the cliffs and their associated buttes and ravines are mostly unvegetated, and richly colored; common Southwest scenery, but here with the added attraction of unusual stripes and patches of color, cutting across the natural thin-layered cross-bedding. The wavy bands occur in shades of orange, red, yellow and pink, and white, which when combined with varied rock forms and textures make for a very photogenic landscape. Exploration is moderately difficult, however, and quite time-consuming owing to the high relief - cross-country walking requires negotiating steep slopes and deep gullies so it can take a while to find the best locations. All the cliffs and the surrounding lands are publicly owned, and there are plenty of good camping places nearby. The stony plains of Yant Flat are also notable for being home to a herd of wild horses.

Yant Flat can be reached from the west starting at St George though part of the route is rather rough, so the best approach is from the east, beginning at Leeds along I-15. From the interstate exit, the Silver Reef Road (later Oak Creek Road) winds past scattered houses for a few miles then enters the Dixie National Forest, where the surface changes to gravel. A notice advises that camping is permitted in designated sites only, a restriction which applies just for the next few miles. The road climbs steeply at first, crossing a high ridge then dropping back down, round the heads of several canyons including Yankee Doodle Hollow, then flattens out as it reaches Yant Flat, where the surface is clayish, and rutted from being driven over when wet. A suitable parking spot for visiting the cliffs is 10.4 miles from Leeds, at a minor crossroads; right is an active ATV track, while left is a disused track, now just a trail. Parking is limited as the main road is quite narrow and has no verges. The surrounding land is flat, covered by typical pinyon-juniper pine forest, dotted with desert plants including yucca, agave, cholla, opuntia and echinocereus. The track/path - apparently known as Anna'a View Point Trail - heads south towards the plateau edge, reaching it after 1.3 miles. The land falls away steeply hereabouts but is more undulating further east. Faint paths follow the rim in both directions.

The exposed red rocks extend several miles east to west, spanning 500 feet or more of elevation, though the best area appears to be from the end of the trail a mile or so southeast. Lower down the ground is much less steep, more overgrown and has smaller erosive features. The main section is characterized by domes and cones, cliffs and ledges, and U-shaped gullies, with all surfaces generally quite smooth, though crossed by thin, parallel ridges and grooves due to the underlying cross-bedding. Some areas have neat hexagonal patterns. In a few places, the predominantly light-colored sandstone is interrupted by small, jagged intrusions of much darker rocks, resembling partly buried dinosaur bones. The wavy color patterns range in scale from thin parallel lines just a fraction of an inch apart to broad, curving bands several feet wide. Most colors seem somewhat faded however; there are few really bright patches. The cliffs face southeast so are best visited in the morning. 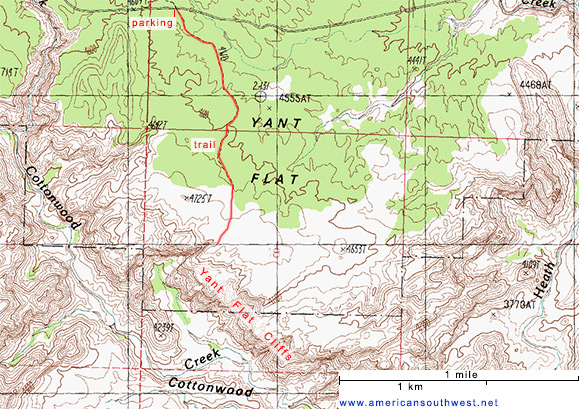 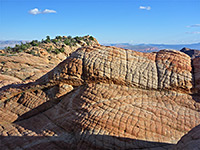 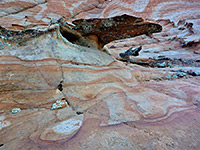 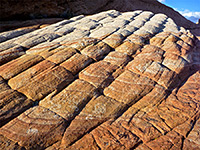 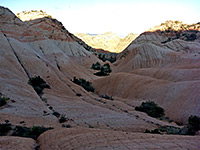