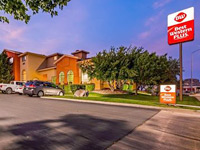 The top hotel in Wendover, along I-80 near the Nevada stateline at the west edge of the desert. Offers an indoor pool, a fitness center and free breakfast

All hotels in Wendover - Affiliate disclosure
The Great Salt Lake occupies 2,500 square miles of Utah northwest of Salt Lake City, though was once part of the much larger Lake Bonneville, which 18,000 years ago extended across 20,000 square miles including parts of Idaho and Nevada. The water level has declined rapidly on two occasions, once when the lake broke through the Sawtooth Mountains near Pocatello in Idaho and caused a devastating flood, and the average depth of the lake is now only around 30 feet. The position of the previous two high water levels can be seen on the hills around the Great Salt Lake - ancient wave-cut terraces make clear dark lines across the rocks, about 550 and 900 feet above the present level.

The lake is famous for its high salinity (which varies between 10 and 25%), second only to the Dead Sea of Israel, but like the Salton Sea in California, the water tends to be rather smelly and this is not in general a place for swimming or sunbathing. However, a rather more spectacular sight is provided by the great expanse of salt flats, remnants of the former Lake Bonneville, that extend south and west from the lake - this huge desert is almost completely white and level for over a hundred miles in some directions. It is said to be possible to see the curvature of the Earth at the horizon.

A large proportion of the Salt Lake Desert is used by the military; Hill Air Force Base to the north and the Wendover Gunnery Range to the south, and there have been many reports of the damage done to the land by the last 40 years of weapons testing. A large section between these two installations is still accessible though, and this is where I-80 crosses the desert. The interstate runs exactly east-west and is dead straight for almost 50 miles, between the Cedar Mountains to the east and Wendover on the Utah/Nevada border. The Great Salt Desert is well worth seeing - there is nothing else like it in America - although it is a long way from anything else scenically interesting.

In some places the salt is covered by a small depth of water, and one good place to view the conditions is a rest area on the interstate, 10 miles east of Wendover at the NV/UT boundary; it is quite an experience to walk a short distance into the salty wasteland. The ground is covered by very sharp salt crystals, so paddling is best not done barefoot. The opposite rest area for eastbound traffic is less good since the Union Pacific railway partially blocks the view. Other good places to the photograph the desert include a frontage road south of the interstate (accessed from Wendover), the short Salt Flats Road that heads north from I-80 exit 4, or the unpaved Silver Island Mountain Road which follows along the north edge of the flats for many miles.

Nearby attractions include the Bonneville Flats, which has a race track and was the location for the land speed records set during the 50s, 60s and 70s. Recent deterioration in the quality of the salt surface has meant that such records are now attempted in the very remote Black Rock Desert of northwest Nevada which has flatter and more reliable ground. Wendover has casinos, so that the good people of Utah can experience the pleasures of gambling, and since the town is a little higher than the desert it is possible to see for many miles across the salt flats.