Highlights:
Stark, treeless, mountainous island in the Great Salt Lake, connected to the mainland by a causeway. Home to diverse wildlife including a herd of bison. Beautiful scenery and far reaching views across the lake
Nearest city with hotels:
Clearfield, 15 miles
Management:
Utah State Parks
Location:
41.058, -112.237
Seasons:
All year. Biting midges are present in May and June
Rating (1-5):
★★★★★
Weather: 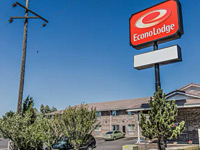 Affordable, pet friendly, interior corridor hotel beside I-15 in Clearfield, close to several restaurants and shops; 14 miles from Antelope Island

All hotels in Clearfield - Affiliate disclosure
The vast, dreamlike landscapes of the Great Salt Lake in northwest Utah can be seen most easily from viewpoints along interstate 80, though a quieter and more evocative perspective is provided by several promontories and islands reached by less-traveled routes, including Promontory Point in the north (near Golden Spike National Historic Site), Stansbury Island in the south and the Lakeside Mountains in the southwest. Some parts of these areas are privately-owned, however; the best place to see the lake is probably Antelope Island State Park, which encloses a stark, mountainous island 15 by 3 miles in extent, centered on peaks rising up to 2,000 feet above the water.

The hills and lowlands of the island are uniformly devoid of trees, covered only by short grass and small granite boulders yet are home to a diverse range of wildlife including deer, bobcats, bighorn sheep, coyotes, pronghorn antelope and a 600 strong herd of bison, who roam freely over the prairie, descendants of a population established in 1893. The shoreline is a mixture of rocky outcrops, white sand beaches and salt/mud flats, bordered by deep water on the west side and a shallower lagoon to the east - at times of low water, in summer, the flats extend over a mile from the island.

Facilities at the state park are two campsites, a visitor center, marina, a cafe, several short paths and 20 miles of hiking trails, all concentrated on the northern tip of the island leaving the majority of the remainder empty and completely undeveloped, though still accessible by cross-country hiking. The park is open all year, the only unfavorable times being May and June, when biting midges are prevalent.

The approach to Antelope Island is through Layton and Syracuse along UT 127/108 (W 1700 S), a straight road past mixed suburbs and farmland, reaching the entrance station (fee $10 per vehicle in 2015) right at the edge of the mainland, at the start of a six mile causeway across the lake. The surroundings change from short grass to salt flats, then shallow pools and finally deeper, choppier water as the island nears. The scenery is unusual and photogenic, since the shallow, calm, blue waters create nice reflections of the hazy Wasatch mountains (see panorama), mingled with wavy sandbars and usually dotted with many birds, though this isn't a place to linger as the salt flats are rather smelly and harbor a multitude of sand flies, just like other saline environments such as the Salton Sea and Mono Lake. Wide verges allow for easy parking anywhere along the causeway. Once on the island, the road passes a small marina (as the water on the north side is now quite deep) and a memorial to 12 US military personnel who died in a 1992 air crash just to the north, and then forks; the left route runs along the east shore to Fielding Garr Ranch, a pioneer Mormon homestead built in 1848, while right leads to all other locations. This road first arrives at a viewpoint on the northern tip of the island, and a trailhead for a 0.3 mile path along a promontory to a rocky knoll overlooking Egg Island, a favored bird residence. To the south is a wide stretch of sand at Bridger Bay, the main day use area in the park, with concessionaires, a campground (no hookups), showers, plenty of parking and a picnic pavilion. Like much of the island, the water's edge is often some distance from the shore and a walk of up to quarter of a mile may be needed to reach the lake.

Shallow water alongside the causeway

Turning right at the next junction reaches the less-used White Rock Bay, also with a campground but no other facilities apart from a trailhead, this being the start point for most of the park's backcountry trails. The land slopes more steeply so the water is closer, edged by a narrower strip of salt flats. Another road ascends half way up Buffalo Point, a low hill at the edge of the island, to a parking area and cafe, from where a 0.3 mile trail completes the climb to the summit, which is formed of pinkish granite with crystalline nodules. The views are very good - not a full 360° panorama as the top of the hill is flat, but unobstructed enough to see nearly all the Great Salt Lake, across to many distant mountain ranges along the south, west and north edges (see panorama). The trail continues down the far side of Buffalo Point to a narrow beach. The point is named on account of the bison herd who inhabit this area, ranging freely over the grassy slopes most of the year, retiring in winter to pens located next to the park headquarters. The animals are easy to spot even from a distance since there is very little vegetation apart from the short grass, yellow-brown for much of the year and sprinkled with weathered, whitish boulders.

Beach by the causeway
Affiliate disclosure

The only other road in the park is along the east side of the island, running generally a little way above the shoreline, though for most of the year the edge of the water is a mile or more further east. The road is paved for the 11 miles to Fielding Garr Ranch, unpaved for the remaining 5.5 miles to the southern tip of the island. Two side roads climb a few hundred feet into the mountains to trailheads, for hikes to Sentry Peak and to the islands highest summit (6596 foot Frary Peak), while another path, very little used, parallels the road generally closer to the lake. The Wasatch Mountains rise up on the far side of the water (Farmington Bay), beyond the continuous suburbia of Clearfield, Layton, Farmington and Bountiful, with downtown Salt Lake City just visible to the south, 20 miles away (see panorama).