Popular, oft-visited narrow canyon that includes The Subway, where the creek flows through a smooth-walled, tubular passage with only a narrow opening above. Further upstream are deep pools and drop-offs that may be seen (with use of ropes) if starting from an alternative trailhead, but most just explore the lower narrows

Difficulty: Moderate to strenuous; obstacles begin just above the Subway

Season: Summer and fall, when water levels are not too high

The Left Fork of North Creek is one of many small rivers that cut into the high plateaus in the backcountry of Zion National Park, forming deep canyons that are often wide and V-shaped lower down, but become quite narrow upstream, with sheer cliffs of Navajo sandstone that rise to heights of 1,500 feet. North Creek splits into left and right forks but the canyon of the former (also known as Great West Canyon) is the most spectacular and easiest reached, famous in part because of a feature known as The Subway, where the creek flows almost through a tunnel - a smooth-walled tubular passage with only a narrow opening above.

For some distance upstream, the canyon is very dramatic, containing circular potholes, deep pools, waterfalls and narrow channels. Two places require the use of ropes or other aids to ascend cliffs and continue up the canyon although most people only go as far as the Subway. The majority of the walk to reach this point is along the side of the stream through a relatively wide valley, winding through trees, shrubs, wildflowers and cacti; the narrow section is reached after 4 miles. The journey is moderately strenuous but very popular. A full exploration of the whole canyon is best done from the top, starting at the Wildcat Trailhead to the north, and descending initially alongside a tributary drainage, Russell Gulch.

Topographic map of the Left Fork of North Creek.

57 views of the Left Fork of North Creek.

The lower trailhead is reached by driving 8 miles north along the Kolob Reservoir Road, a paved route that joins UT 9 at the small town of Virgin and climbs steadily, following close to the course of North Creek. There is a carpark with hike information on the east side of the road, two miles after the Zion National Park boundary, from where the trail begins. This location has space for around 20 vehicles, with overflow parking on nearby verges, though the numbers are self-limiting, because of the permit system that restricts the number of visitors.

Leaves on a rock

Left Fork of North Creek is within Zion National Park, and the normal admission fee ($35 in 2022) is required, although there is no entry station along the Kolob Reservoir Road. In addition, because the hike has become so popular in recent years, with a risk of erosion and damage to wildlife, a limit of 80 people per day (and no more than 12 in a group) has been imposed, and a permit is necessary, which from 2004 has been 1-2 people: $15, 3-7 people: $20, 8-12 people: $50. Permits for 60 of the 80 may be booked in advance by either email or postal applications, 3 months prior to travel, with successful candidates determined by a lottery system, or for the other 20, obtained from two to seven days before travel from one of the two park visitor centers at Kolob Canyon or Zion Canyon (the "Last Minute Drawing"). A $5.00 non-refundable fee is required, in advance, for this option. Zion backcountry hiking regulations change often, and may become even more restrictive.

The well marked trail winds across a sandy, basalt plateau for one mile, dotted with bushes, pinyon pines, junipers and cacti, then descends steeply to the river, mostly straight down with no switchbacks, over sometimes loose ground. A sign just before the edge of the plateau marks the boundary of the Zion Wilderness Area; soon after, the noise of the trickling water in the creek below is first audible, 400 feet below. After the descent it is 4 miles upstream to the Subway. The trail is initially on the west side of the creek, but soon crosses many times and it is not always easy to recognize the official route; often there are faint paths on both sides. A tributary stream, Pine Springs Wash, joins from the north after 1.2 miles, and the smaller Little Creek 0.2 miles further.

The Subway
Although the river has occasional deep pools and boulders with little waterfalls, it is generally shallow, and becomes quite shaded with plenty of vegetation; the cottonwood trees in the lower canyon are gradually replaced by oak and canyon maple. The valley takes a while to become sheer-walled and narrow, but eventually the walls close in and the water starts to covers all of the canyon floor in some places. Early photogenic sections include a sequence of small falls leading to a bigger pool below a waterfall, and a few half-subway channels, where one wall of the canyon has been hollowed out by the stream.

Canyon maple in the fall
After a temporarily wider area, a sparkling whitewater cascade known as Archangel Falls marks the start of the most scenic section of the gorge; here, the creek flows over an enchanting red rock staircase formed by many thin layers of the Kayenta Formation, bordered by clusters of delicate wildflowers growing in sheltered alcoves at either side. The rocks hereabouts are covered with a thin layer of algae, making them extremely slippery. Next are a couple of elongated falls over taller benches, below a huge, curving alcove formed by a dramatic, streaked, greenish cliff, and then a big slab of sloping slickrock where the creek has eroded a straight, narrow channel just a few inches across, known as The Crack. The streamway bends to the right, between more colorful cliffs, at the base of which are many clumps of monkeyflowers, shooting stars and other riparian plants.

Archangel Falls
The Subway section is reached just upstream, formed at the boundary between two rock layers; the older Kayenta Formation is softer than the overlying Navajo sandstone and so has been hollowed out to a greater degree. The tunnel-like passage is fairly short, a few hundred feet, containing some pretty, circular pools of turquoise water and leading to a beautiful narrow slot filled with deeper pools, not far beyond which is a waterfall. There is in general no easy way to continue, unless, as it sometimes the case, a rope is fixed to the rocks on the right hand side, but if not, this marks the end of the hike.

Streaked alcove and overhanging cliff
A few hundred yards above the waterfall, the canyon narrows again to a passage only a few feet wide with nicely carved rocks, pools over 6 feet deep and sheer cliffs at either side. This ends at another waterfall with a tiny arch at one side and a 3 foot deep pool underneath. To climb these falls would require another rope (not usually present). Beyond here are more pools, falls and boulders for half a mile, until Russell Gulch joins from the north, then soon after begins the path to the Wildcat Trailhead. 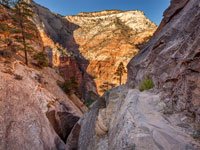 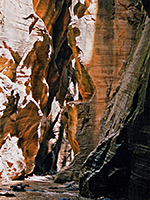 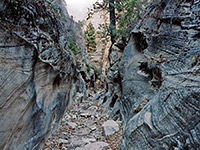 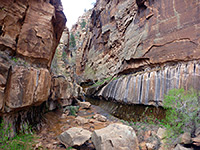 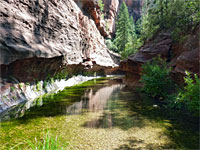