Plants > Wildflowers > Valerianaceae
Valerianaceae is a small family (4 US genera, 34 species) of annual or perennial herbs, which produce dense, spherical or branched clusters of bilaterally symmetric flowers. Leaves grow mostly around the base of the stem, they have an opposite arrangement, and are often pinnately divided or lobed. Flowers have a tubular corolla supported by a small calyx, and opening to five fused lobes. At the center are between one and four stamens. The calyx may be simple, and unlobed, or divided into between five and 15 lobes, becoming feathery as the flower matures. Plants often exude an unpleasant aroma. This family is sometimes included in the caprifoliaceae. 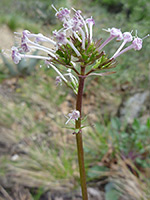 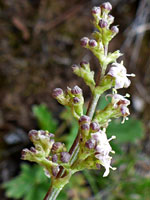 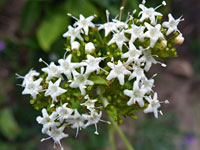