Plants > Wildflowers > Rubiaceae
Most rubiaceae species are shrubs or trees, but some are small herbs, such as those in the large galium genus, which accounts for over a quarter of the 322 species in the US (in 69 genera). Flowers are often small and somewhat inconspicuous, borne at the tip of the stems and at the leaf nodes, often in clusters. Leaves are opposite or whorled, with entire edges. The bases of adjacent leaf stalks may be linked by fused stipules. Flowers have four sepals (less often five), fused into a lobed calyx, the same number of petals and the same number of stamens. Rubiaceae is variously known as the madder, coffee or bedstraw family. 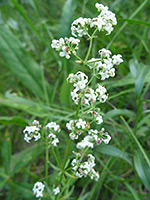 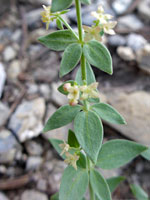 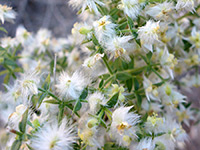 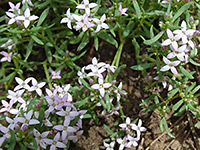