Plants > Cacti > Escobaria
Known variously as foxtail cactus, pincushion cactus or spiny star, escobaria is another group of small, tubercular cacti, similar to mammillaria and coryphantha; the main difference with the former is that flowers appear at or near the top rather than lower down the stem, while the latter has different seeds (the surface is crossed rather than pitted). The US has over a dozen escobaria species, most very localized and uncommon, the main exceptions being pink-flowered escobaria vivipara and yellow-flowered escobaria missouriensis, which are widespread across half of America. Most form low clumps, with stems covered by a dense network of short, pale-colored spines. Some of the species are alternatively classed as coryphantha. 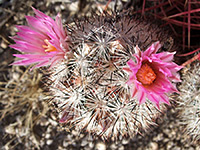 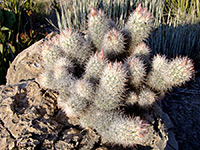 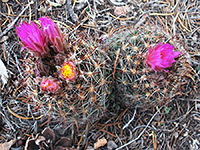 Common beehive cactus
Escobaria vivipara
The other US species are: