Plants > Cacti > Coryphantha
Coryphantha cacti look like mammillaria in that they are small, have prominent tubercles rather than ribs, and are solitary or form closely-spaced clusters; the main difference (shared with escobaria) is that flowers are borne at the tip, rather than a little way down the stem. They are commonly known as beehive cacti, or topflower cacti. All tubercles of coryphantha have a lengthways groove on the upper side, helpful for identification. Over a dozen species have been identified in the US, with many more in Mexico. Most are uncommon, and are found only in the far south, in Texas and New Mexico, near the international border. Some cacti included as escobaria species may be alternatively be classed as coryphantha. 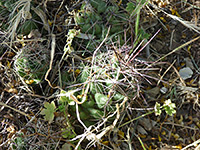 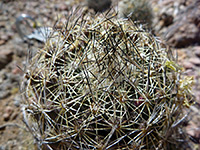 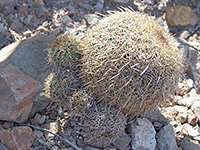 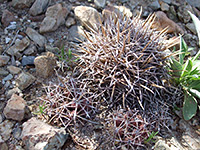 Robust spine beehive cactus
Coryphantha robustispina
The other US species, all rather rare, are:

A much more common plant, coryphantha vivipara, is now classed as escobaria vivipara.