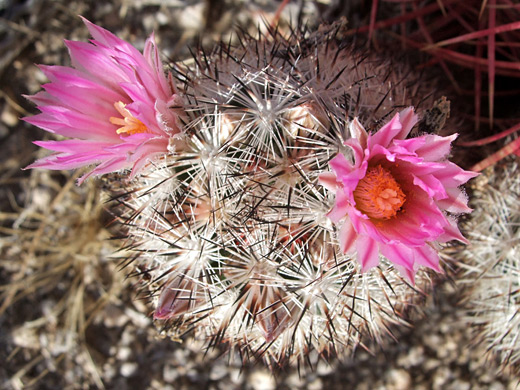 Although locally common in some places, escobaria alversonii is a quite a rare species, classed as being of conservation concern. It is found along the southern edge of the Mojave Desert, seen most readily in Joshua Tree National Park. Plants have some similarities to the much more widespread (and variable) escobaria vivipara, but have a denser spine covering, and many of the central spines point outwards, instead of being appressed close to the stem.

Escobaria alversonii plants have between 18 and 33 radial spines per areole, about 2/3 of an inch in length, and between 12 and 18 central spines (slightly longer), which radiate outwards at all angles. Spines can be all-white or partly to mostly colored; grey, light brown, purplish or black. Stems reach a maximum height of 10 inches. The attractive pink flowers are borne close to the tip; they consist of an outer ring of tepals, fringed with white hairs on the undersurfaces, around a slightly darker inner ring. 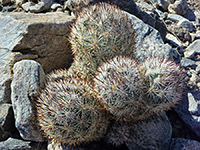 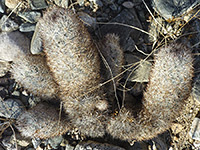 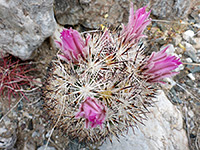