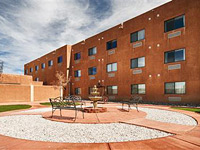 Adobe-style hotel along US 550 in the center of Bloomfield, within walking distance from shops and restaurants; the Aztec Ruins are ten miles north

All hotels in Bloomfield - Affiliate disclosure
Like Montezuma Castle in Arizona, the Aztec Ruins were mistakenly thought by early white explorers to be relics of the great 15th century central Mexican civilisation, though as with most other ancient settlements of the Southwest they actually date from around the 12th century and were built by tribes indigenous to this region. In this case the people were probably related to the Mesa Verde group in Colorado though they also had close ties with Chaco culture, the center of which was 55 miles south. What remains today is a walled village with almost 400 rooms on three levels, over a dozen kivas (circular ceremonial areas), and which since excavation and limited reconstruction may be toured in a very good state of preservation.

Aztec Ruins National Monument is just 2 miles from the center of Aztec, a bustling town near Farmington in the far northwest of New Mexico, and close to busy US 550 that leads to Durango in Colorado. The countryside nearby is partially farmed using water from the Animas River though most is an unproductive expanse of dry sandy washes between low limestone mesas and has been drilled quite extensively for oil. The main ruined village is now part of a 27 acre complex that also contains several smaller unexplored sites, the visitor center and a picnic area. The Aztec suburbs now extend as far as the edge of the monument and include three Indian arts and crafts shops, catering for the relatively large number of visitors - the site seems quite popular, presumably as access is so convenient.

Walls of the second largest kiva

The visitor center has the usual small bookshop, museum and video presentation plus information about local wildlife and plants. Entry (2020) is $5, per person since the monument is visited on foot, unlike the majority of NPS properties where driving is required and the entrance fee is per vehicle.
Affiliate disclosure

Most of the rooms in the main village (the 'West Ruins') and all the rest of the site are closed to the public; admission allows tourists to walk a short, self-guiding trail through selected areas, which takes around 30-40 minutes depending on the number of stops. It first leads to a high viewpoint of the village, then follows along the outside of the west walls to a small separate structure, the Hubbard tri-wall site, which has partially buried remains of an unusual kiva-like building with three concentric circular walls. The trail then returns to the main ruin and passes through several ground floor rooms which still have complete roofs, into the main plaza and past several other rooms, finally returning to the visitor center via the reconstructed Great Kiva - almost 50 feet wide, this was rebuilt in 1934 by archaeologist Earl H. Morris (who originally excavated the whole site, between 1916 and 1922) and gives a good impression of what life was like in these villages, though some aspects of its construction are based on guesswork, such as the height of the roof. In addition to the West Ruins there are four separate archaeological sites to the east that are unexcavated and likely to remain so, unless NPS policy changes.

Construction of the Aztec settlements began in the late 11th century, had two distinct phases separated by many decades of inactivity and ended around 1300 as the residents moved away, probably to neighboring areas such as the pueblos of the Rio Grande valley and the present day Hopi and Navajo reservations in Arizona, a relocation thought to be due either to drought or loss of fertility of the surrounding lands. The village became ruined, slowly covered by the desert sands and remained unvisited until the mid nineteenth century - the first known rediscovery was in 1859. Years of sporadic looting and several archaeological expeditions followed and not until 1923 did the ruins receive full protection when the national monument was established. The site is still considered sacred by many Southwestern tribes.