Beautiful, high-elevation, flower-filled basin containing an old mine, streams, waterfalls, cliffs and four small lakes, just below the mountain crest. Reached by walking or driving 3 miles along a 4WD track, then by relatively easy hiking

Type: One way; possible loop around the basin, partly off-trail

Porphyry Basin is one of over a dozen high elevation valleys along the east side of the Uncompahgre Range in the San Juan Mountains, and like some of the others it is enclosed on three sides, by the mountain crest to the west, and narrow spurs to the north and south. Contained within are four small lakes and many little ponds, relics from a gold mine, several waterfalls, and abundant Alpine landscapes of cliffs, meadows, streams and scree slopes, all supporting particularly abundant wildflowers in the summer.

The basin is relatively easy to access compared with some similar areas since it is quite close to US 550, the Million Dollar Highway, above the upper end of the Mineral Creek valley; to the south, the mountain crest becomes steadily further from the road, and higher above it. Like Mineral Basin to the north, Porphyry is reached by a 4WD track that zig-zags up the hillside, climbing 1,400 feet in three miles, and ending near the mine site, from where all points in the basin, including the mountain crest, are less than a mile away. Because of the 4WD access, the basin is visited quite often, though it remains completely unspoilt. Wildflowers are numerous at all elevations, and a hike all the way from the highway encounters a hundred or more different species.

Approaching the basin
Non-4WD vehicles could drive a little way up the track, but even if starting from the highway, the hike is not too strenuous, taking about half a day; a round trip of 8 miles, with 2,000 feet of elevation gain, mostly on the track. The views are spectacular right from the start, initially up and down Mineral Creek, then of the upper end of Porphyry Gulch and the more enclosed scenery of the basin. A short climb up the slopes on the far side of the basin, to the ridgeline, reveals an even grander vista, back down the gulch and northwest over Mud Lake Basin, high above Telluride.

FR 822, the unsigned track to Porphyry Basin, leaves US 550 on the west side, 0.7 miles south of Red Mountain Pass, and 0.5 miles from the track to Mineral Basin, which is much busier since it is a through-route, crossing the crest at Black Bear Pass and descending to Ingram Basin to the west, then continuing to Telluride. Parking for 2WD vehicles is available at the start of the Porphyry track.

Waterfall near the mine

Track to the Basin

The route ascends steadily via several switchbacks to a junction, with a spur to a house, marked No Trespassing. Just beyond is an unofficial camping area, in a patch of pine trees. More switchbacks take the track 500 feet up to another junction, with a lesser track to the north, connecting with Mineral Basin Road. Then, after one final small bend, the road to Porphyry Basin becomes nearly straight, while coming close to a narrowing ravine to the south, the valley of Porphyry Gulch. At the last bend is another parking place, used by less rugged vehicles, this 1.8 miles from the highway; some sections over the final mile are somewhat rougher though still not particularly difficult. The track eventually crosses a little stream, flowing down the upper part of the gulch, and leads to the usual parking area, ringed by cliffs; although a fainter track does continue half a mile further, up to the largest lake in the basin, vehicular access is blocked after a while by a boulder. A spoil heap and pile of aged planks mark the site of Bullion King Mine (abandoned since the early 1900s), on a mound above the stream, which flows over a cascade and through a short, rocky gorge. Another stream to the south tumbles down a tall cliff, forming a graceful waterfall.

From the parking area, just above the mine, the basin can be explored by easy cross-country hiking, and a suggested loop is clockwise, first heading south to Bullion King Lake, ascending further to a ridge overlooking land to the south, dropping back down to the three upper lakes and rising again to the main mountain crest, and finally returning to the road. For this loop, a faint path heads south, up a gully beneath low cliffs which harbor snow drifts well into summer, later climbing alongside the small stream which flows from Bullion King Lake. This lake is very pretty, lined by cliffs for about half its shoreline, centered on a waterfall fed by a stream from one of the upper lakes. The route goes around the south edge of the cliffs via a trail, and up a little more to the main, higher level of Porphyry Basin. A well-defined path continues west, over short grass meadows and patches of smooth granite, up to the top of the spur that forms the south rim of the basin, revealing a grand vista of lands to the south, including the Valley of Mill Creek.

Porphyry Lake and the Mountain Crest

The loop continues, now off-trail, by descending back into the basin, walking north past two unnamed lakes, one cloudy and somewhat turquoise due to glacial deposits, then over a little ridge to Porphyry Lake and a few adjacent pools. This area has particularly abundant summer flowers, plants often growing in dense patches including Parry's primrose and white marsh marigold. The lowest point on the mountain crest is now due north, just 150 feet above, reached by an easy walk up a scree slope covered with large, firm boulders. Narrow ridges slope up to the peaks to the southwest (Three Needles) and northeast (unnamed), while to the northwest, the land falls away steeply to Mud Lake Basin, which contain several pools, one glacial, followed by a bigger drop to the valley of Bridal Veil Creek. The distance from this viewpoint to the upper end of the road to Porphyry Basin is half a mile; back down the scree and the grassy slopes beyond, followed by a descent past a line of black cliffs and then into the less steep surroundings of the lower basin.

Rocks beside a lake 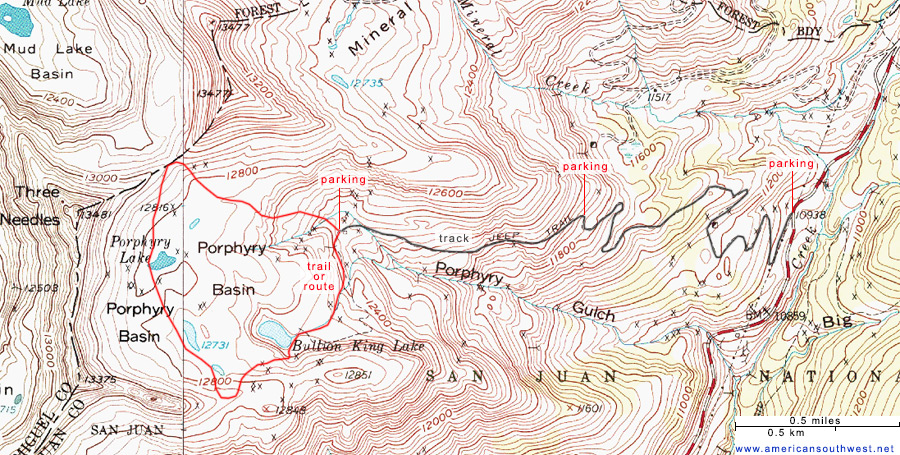 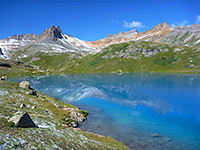