Highlights:
Ancient volcanic peak surrounded by flat cactus desert, at the center of a small park with a popular campground, and a strenuous trail to the summit
Nearest city with hotels:
Eloy, 14 miles
Management:
Arizona State Parks
Location:
32.634, -111.415
Seasons:
All year, though hiking to the summit is best avoided during the summer months due to the extreme heat
Rating (1-5):
★★★★★
Weather: 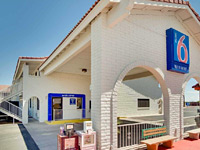 Budget-priced motel with a quiet locaton at the edge of undeveloped desert beside exit 200 (Sunland Gin Road) of I-10, 20 miles from Picacho Peak

All hotels in Eloy - Affiliate disclosure
Half way between Tucson and Casa Grande, I-10 crosses undeveloped land of the Sonoran Desert, completely flat apart from a few well separated mountains. One right next to the interstate is Picacho Peak, formed largely of ancient lava, which rises 1,500 feet above the desert - high enough for the summit to give a panoramic view of the surroundings, a vista that on a clear day extends to the Tucson and Coolidge/Casa Grande suburbs, each about 30 miles away.

The peak is contained within a state park that also has a campground, picnic areas and several short nature trails, but the main attraction is the 2 mile path to the summit. A little more difficult than the average maintained trail, this route climbs 1,300 feet and includes several sections where the path ascends steep cliffs by means of metal railings and cables, and makes a very enjoyable half day hike. On the way the trail encounters plenty of saguaro, many other cacti, the occasional Hohokam petroglyph, and gives close-up views of the dark volcanic rocks that form the upper part of the mountain.

Picacho Peak State Park has a dedicated I-10 exit (no. 219), from where a short road passes the visitor center/entrance station (fee $7 per vehicle in 2020) and winds along the north side of the mountain to the campground, several day use areas and three trailheads. The peak is visible from a long way off when driving along the interstate owing to its relative isolation, away from the neighboring ranges; the volcanic origin is also reflected in the sheer, jagged rocks on top, different from the more rounded summits of the regular mountains nearby. The vertical cliffs make Picacho Peak seem impossible to climb when seen from the highway, though the summit trail crosses over an intermediate ridge and completes the ascent up the less steep south side. Besides the main route (the Hunter Trail), the park has another long path - the 3.1 mile Sunset Vista Trail - which traverses the foothills on the south side, giving views over endless saguaro plains and dry washes, land covered with wildflowers in spring. Three shorter routes are the 0.7 mile Calloway Trail to a viewpoint of the I-10 corridor to the southeast, the 0.2 mile Childrens Cave Trail and the 0.5 mile Nature Trail. One other point of interest in the park is the site of the only Civil War battle to take place in Arizona; on April 15th, 1862, when three Union soldiers were killed by a group of Confederates from Tucson.

Trail to the Summit

The path to the Picacho Peak summit (the Hunter Trail) starts from a small parking area at elevation 1,980 feet, a facility shared with the Calloway Trail. It begins climbing right away, heading up a cactus-covered slope towards vertical basalt cliffs, through several switchbacks as the gradient increases, plus a series of steps cut into the bedrock, and some railings to assist the ascent up one particularly steep place. The path soon reaches the base of the cliffs, an area in shadow for much of the morning, then veers east, up another slope to the foot of taller cliffs that rise 400 feet straight up to the summit. The next section turns back west, climbing above the first cliff to a saddle at 2,960 feet, where for the first time all the land to the south becomes visible. This is a possible destination for a shorter hike; already the views are very good. Although now just 300 feet below the peak the cliffs prevent any quick access, and the next part of the path descends rather steeply down the south face of the hill by means of cables, before bending east and rising again, up to a signed junction with the Sunset Vista Trail. The final stretch to the summit is equipped with more sets of cables and railings to overcome some nearly vertical rocks, and at one point runs across a cliff face with a sheer drop off at one side. The last cables take the path to the top of a plateau, which seems to be the summit when approaching from below, though the actual highest point is a few hundred feet beyond. At the top the weather is often breezy, and noticeably cooler than during the mostly sheltered ascent, but still this is not a hike for summer as the temperatures are too high. The view from Picacho Peak includes over 30 miles of I-10, from Casa Grande and the I-8 intersection to the northern suburbs of Tucson/Marana. The Tohono O'Odham Indian Reservation lies to the west, beyond a vast expanse of saguaro stretching to the Sawtooth Mountains on the horizon, 20 miles away.

Cables on the trail

Ridge south of the summit