Deep canyon with a few slot sections and miles of medium-width passageways through dull-colored sandstone, joined many narrow, branched but fairly shallow tributaries. In a little-visited region yet close to Interstate 70

There are relatively few canyons on the west side of the San Rafael Swell, where the land slopes more gently and does not form the dramatic reef that characterises the eastern edge. One of the best is Devils Canyon, a long drainage that starts just beneath the highest point in the Swell, 7,921 foot San Rafael Knob, and has eroded deep into generally dull-colored straticulate layers of Cedar Mesa sandstone that cover this region, forming some narrow sections and joined by many slot-like tributaries. All the canyon is close to Interstate 70 and is easily accessed yet is quite undisturbed and not often visited. At least two days is needed to fully explore this area though the best of the main gorge and several of the side branches can be visited on a day trip.

Pool before a slot

Access is from exit 116 of I-70. The main road from this exit (Moore Cutoff Road) heads northwest and provides a handy short cut to UT 10 and places to the north, and is also used to reach Forgotten Canyon. There is also a side track to a picnic spot, viewpoint and maybe campsite - a sheltered location overlooking a number of deep sandstone canyons, tributaries of Eagle Canyon which along with Devils is one of several extensive canyon systems in this area. The next few miles of I-70 eastwards pass several other branches before the freeway descends a little and crosses the open grasslands at the centre of the Swell.

Devils Canyon is reached by a less used road south at the interstate exit - gravel at first, this soon descends onto a plateau (Justensen Flats) and becomes a dirt track. It passes a sign with information about the Devils Canyon Wilderness Study Area and continues another couple of miles through shrubland, curves back west and crosses the canyon which at this point is quite shallow. The track later splits into several branches and leads to various remote locations including the Copper Globe Mine, but all these routes need a 4WD vehicle.

Large pothole
The quickest way to reach the canyon on foot is to park near the WSA sign, walk south along a disused track (closed when the WSA was established) for half a mile then veer west following close to the base of the nearby cliffs, past the heads of some small side ravines and drop into the streambed at one of several points where access is easy.

Above the streambed tower high, yellowish sandstone cliffs and curvy domes, formed of many thin strata. The canyon at this point has a wide, flat sandy floor with patches of pebbles, and allows easy walking throughout its whole length. From the entry point, the gorge turns through a series of wide bends, and in places has a few nice fluted water-carved terraces and rocky channels, though the first proper narrows section is not reached until after one hour's walking. Then the floor drops about 5 meters into a twisting slot, upper end of which has a large muddy pool. This slot section only lasts a few hundred meters but is quite deep and impressive - it can be entered by climbing down a wall on the right side, or bypassed by walking along the rim on either side, rejoining the main canyon downstream. The narrows have a couple of chokestones but pose no great problems.

Exit from the main narrows

Start of the main narrows


This slot section ends suddenly at a 90° turn north, and for the next few miles Devils Canyon stays several meters wide, sometimes forming a sheer walled passage but mostly with sloping walls. The cliffs are always colorful, rising to heights of 800 feet in a series of vertical walls, strata and benches. Just out of sight to the north, but within earshot, interstate 70 passes by, close enough in a few places to allow views right down into the gorge.

The canyon has one big pothole and a few other smaller pools, nothing that hinders progress. The yellowish Coconino cliffs are crossed occasional deep red bands, and red becomes the dominant colour when the streambed enters the underlying Kayenta layer after a few miles. Although the main canyon seems to have no more significant narrows it does have many side canyons up to one mile long which do have long slot-like passages - all rather shallow, they nevertheless are quite intriguing and present a variety of pretty textures, colours and rock structures. A few are exceedingly narrow, some have watery potholes, others are long and flat with occasional pour-offs, and all cut through narrow, often angled strata, quite like the rocks in nearby Crawford Draw.

Deep side canyon
Three of the best tributaries are as follows:
Nearby Canyons 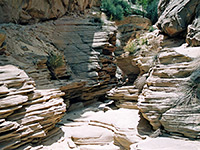 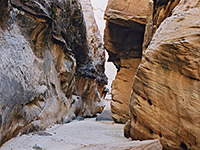 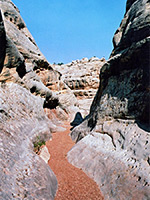 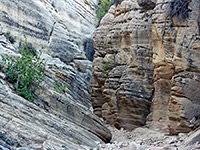 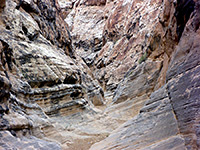