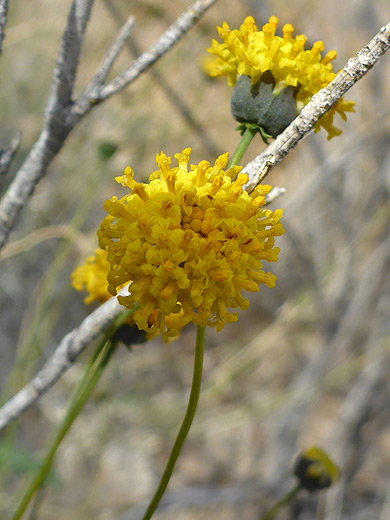 The leaves of thelesperma longipes are found mostly around the lower half to quarter of the stem, and they are divided once or twice into a few short, thin, linear lobes. Leaves grow close together, the stalks separated by one inch to a quarter of an inch or less. Plants usually produce a single stem, branching from the base. Leaves and stems are hairless.

The inflorescence is a open cluster of a small number of flowerheads, which have disc florets only, no rays, numbering between 20 and 100. The florets have yellow corollas with faint reddish veins, and open to five small lobes. The lobes are longer than, or equal in length to, the throat of the corolla. The five to eight phyllaries are colored dark green, and they are fused to around two thirds of their length. Underneath are five small, reflexed, ovate, green bractlets, generally not projecting beyond the edge of the involucre, unlike those of the similar thelesperma megapotamicum. 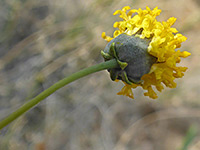