Plants > Wildflowers > Saururaceae
The saururaceae (lizard's tail) family contains only four genera and seven species, of which three are found in the US: anemopsis californica, houttuynia cordata and saururus cernuus. The former is the only western species. Plants are perennial herbs, generally found in cool, moist places, and producing vertical flower clusters. Flowers have stamens or pistils, but no petals or sepals; instead they are subtended by one petal-like bract, often colored. Leaves are undivided, and alternately attached. 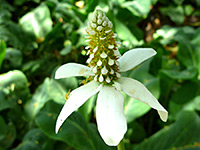