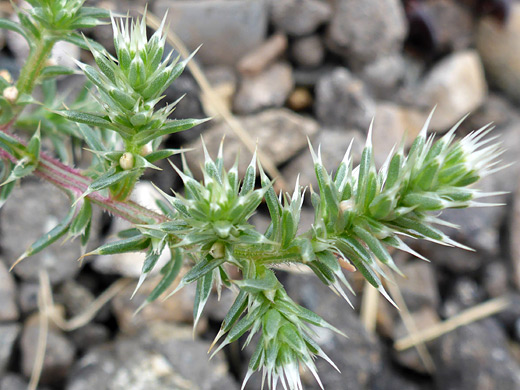 Salsola tragus is the most widespread of eight species of this non-native genus to have become established in the US, after being introduced in the 1870s. Plants branch profusely, forming dense clumps, several feet high and wide. Leaves are clustered, linear to thread-like, and terminate in a spike. Towards the end of the branches they merge with bracts, similar in appearance, though shorter, and with a longer, wider spine.

Stems are green or reddish, often striped, either green/red or white/red. Stems may be glabrous or sparsely covered with short, rigid hairs. After flowering and withering, the dried stems readily break at ground level allowing them to be moved by the wind; this is one of several species known as tumbleweeds.

Flowers are produced singly at the base of the bracts, forming a narrow, elongated cluster. Flowers have no petals, instead a ring of thin, papery sepals, pink towards the middle otherwise white. Five short stamens radiate from the center. 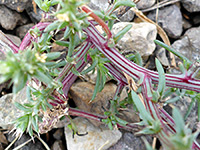 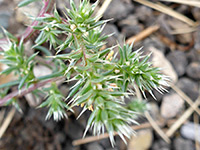