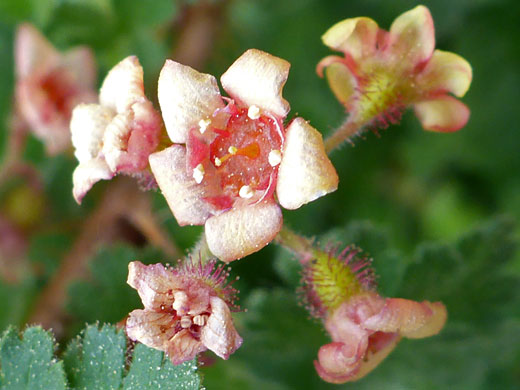 Ribes montigenum is a common species of high elevation areas across most of the West, especially the Sierra Nevada and the Rocky Mountains. Plants are small shrubs, with spreading branches, often touching the ground. Branches have a sparse to dense covering of short, red-based prickles, of varying lengths, and are also armed with whorls of between one and five thicker and longer spines, at the leaf nodes. Leaves are divided almost to the base into three lobes, themselves shallowly divided, or coarsely toothed. Leaves and pedicels have a covering of glandular hairs.

Flowers are produced in clusters, usually of three to eight; they are formed of five tiny, red, wedge-shaped petals alternating with five larger pale green or pale red sepals. The nectary disc at the flower center is orange to red. Below the sepals is a greenish-yellow ovary, covered by red bristles, topped by lighter colored glands; this matures to the spherical red fruit, around a third of an inch in diameter. 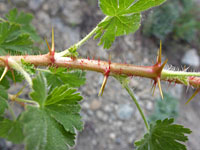 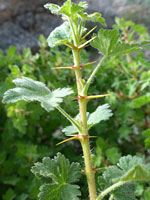 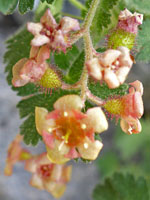