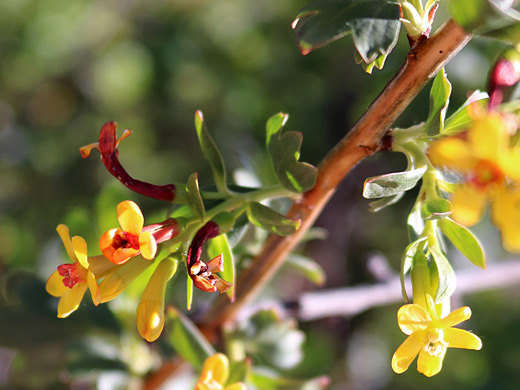 Flowers of ribes aureum are produced as short (up to 3 inches), elongated, evenly-spaced clusters of 3 to 18 heads, from the leaf nodes. They consist of five non-overlapping yellow sepals (greenish towards the base), around a tubular hypanthium (corolla-like structure), which has rounded, spreading lopes at the top, while at the center are five much smaller, yellow, orange or red, scale-like petals, five similar-length stamens, and a group of fused, greenish styles. The hypanthium becomes red as it withers. Flowers are attached by hairless, jointed pedicels, up to half an inch long.

The woody, much-branched stems may be lightly hairy, or hairless, and they have no spines. Leaves grow on stalks of up to one inch, and are divided about half way to the base into three (less often five) rounded lobes, themselves toothed, or shallowly lobed. Leaf surfaces are essentially hairless.

There are three varieties of ribes aureum; var aureum has a hypanthium less than twice as long as the sepals, while for var gracillimum and var villosum the hypanthium is more than twice as long as the sepals; the former, found in only western California, has petals which age to red, while petals of the latter, occurring mostly in the eastern half of the US, age to orange. 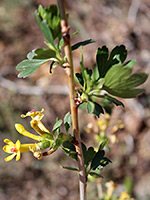 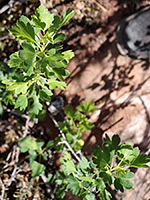