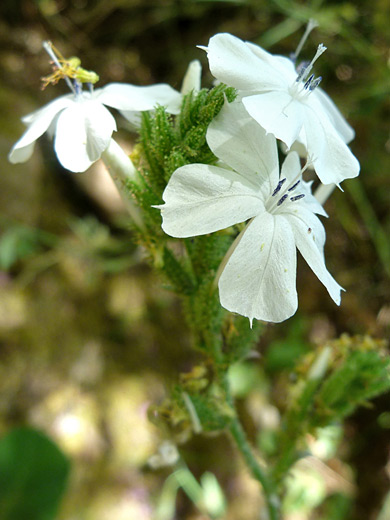 In the US, plumbago zeylanica is found only in warm, frost-free regions, in far south Arizona, a few places near the Rio Grande in Texas, and in south Florida. The vine-like stems are smooth, hairless and slightly ridged, while the leaves are somewhat variable in shape, but generally broad and approximately elliptic, tapered at the base and pointed at the tip. They are usually attached via short stalks. Stems often grow sideways, close to the ground, or climb on neighboring plants. Flower clusters form at the top of the branched stems; they are supported by short stalks which are glandular-hairy, as are the narrow green bracts beneath the flowers.

Flowers have a slender, tubular corolla, up to an inch in length, opening to five lobes, a little more than an inch across, each of which have a distinct midvein, extending to a small spike at the tip. Five white stamens topped by dark-colored anthers project a little way out of the mouth of the tube. 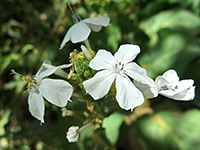 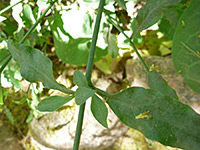