Plants > Wildflowers > Plumbaginaceae
Plumbaginaceae (leadwort) is a small plant family; the US has 20 species in four genera, distributed in dry, warm regions, mostly along the Pacific coast, the Gulf coast and the southern edges of the desert states. Flowers are radially symmetric, with five fused sepals, five petals, fused to form a tubular corolla which opens to five lobes, and five stamens. Flowers tend to be quite small. The lobes are often narrower at the base (clawed). Leaves grow at the base of the plant, often in a rosette, and also along the stems (alternately arranged). Leaves may be lobed or entire. Most plumbaginaceae species are perennial herbs. 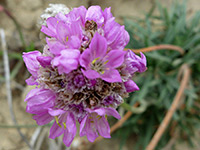 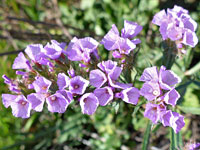 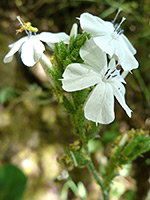