Plants > Wildflowers > Oleaceae
There are 77 Oleaceae (olive family) species in the US, in 15 genera (nine of which are non-native), including chionanthus, forestiera, fraxinus, ligustrum and menodora. Most are shrubs and trees, with leaves that may be simple or compound, evergreen or deciduous, and alternate or opposite. The size and distribution of the inflorescence is equally varied. Individual flowers tend to be radially symmetric, with a cup-shaped calyx and between four and six petals. Flowers usually have two stamens, one pistil and a two-lobed stigma. 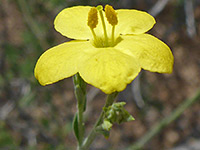