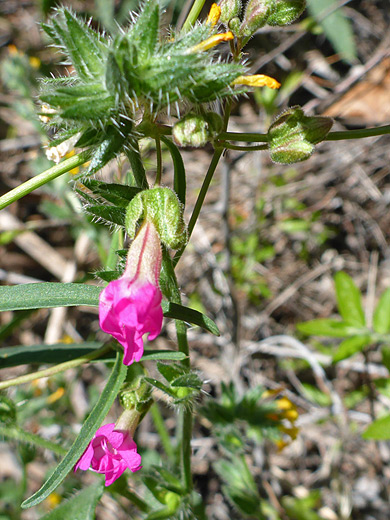 Mirabilis coccinea is one of the smaller-flowered members of this genus. Despite its common name (scarlet four o'clock), flowers are pink-purple rather than red, almost one inch in length, with a narrow, funnel-shaped tube that opens quite abruptly about half way along, to five spreading lobes. Four pink filaments topped by bright yellow anthers project beyond the lobes, as does a longer style, bearing a head-shaped stigma. The lower part of the tube is contained within a greenish, cup-shaped involucre, on a narrow stalk that often hangs down from its attachment point, at the upper leaf nodes.

Stems and leaves are generally hairless - one characteristic that differentiates this species from the narrow-leafed variety of mirabilis linearis, which has sparse pubescence. Leaves are dark green, long and narrow, with a lighter-colored midvein; they form in pairs, and are spreading to ascending; angled between 90 and 45 degrees to the stem. 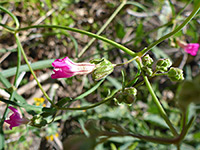 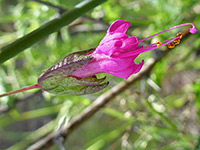 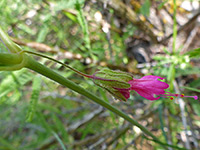 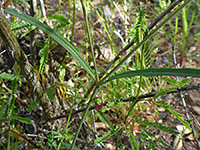